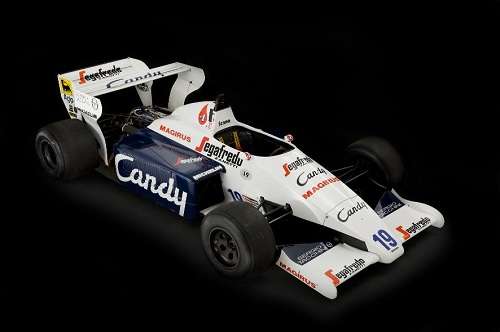 Aryton Senna is known for being one of the greatest race car drivers the world has ever seen. Now a Toleman TG184-2 Formula One car driven by the late and great Ayrton Senna is going up for auction.
Advertisement

The Toleman TG184-2 race car was driven by Senna in his debut F1 season for Toleman. The car will be auctioned at The Spring Sale, which will be hosted by Silverstone Auction company, on May 16th.

This particular Toleman car has become legendary to F1 fans all over the world and is best known for launching Senna into the F1 history books. In a remarkable show of driving skill, Senna went from last place to second place in the rain-soaked 1984 Monaco Grand Prix. This race demonstrated to the world his extraordinary talent. Many thought Senna would have won the race if it was not stopped due to the heavy rain. (Senna was actually known for being able to race and handle cars effortlessly when it was raining. One of his many amazing driving skills.)

So this Toleman F1 car is a truly unique piece of racing history that a enthusiastic F1 fan can buy, if they have deep pockets.

“We are thrilled to bring this iconic race car to auction as it’s undoubtedly one of the most important lots we’ve ever offered under the hammer.” said Nick Whale, managing director at Silverstone Auctions. “Senna mania is reaching fever pitch and rightly so as he’s considered by many as the greatest F1 driver we’ve ever seen. It goes without saying that this will be one of the star attractions at the sale as it’s a very rare chance to own a much sought after piece of motorsport and Ayrton Senna history.”

The Toleman car has been in private ownership for the past 16 years, so its sale at open market really is a great opportunity for people looking for a race car with historical significance. Senna also raced this car in the British Grand Prix, coming in 3rd place, and in the Canadian Grand Prix, which he came in 7th place.

Silverstone Auctions has sold Senna related items before and quite recently. At its first auction of this year, a helmet and race suit used by the Brazilian driver fetched £74,750 (roughly equivalent to $118,300 US dollars) and £35,650 ($56,410). This was much more than their pre-sale estimates and what anyone anticipated.

Who knows what the Senna F1 car will fetch? I imagine it will be quite a lot of money!

And while the Senna race car is undoubtedly the highlight auction piece at the forthcoming Spring Sale, it will be joined by an impressive range of other race cars, modern sports cars, motorcycles and automobilia. One particularly notable car going up for auction is a stunning 1973 Porsche 911 Carrera RS 2.7.

“Excitement is building for the auction which promises to be a must attend sale for any serious collector or motorsport enthusiast.” added Nick Whale.