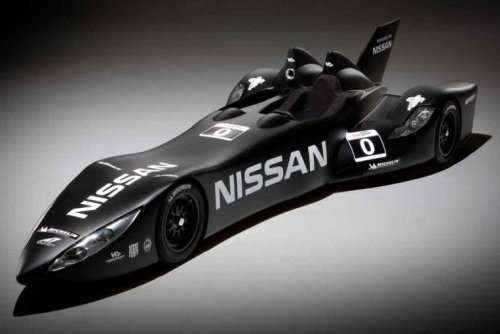 Nissan DeltaWing heading to Europe for further development and testing

Some of you might remember when Nissan announced the debut of the Nissan DeltaWing project a few weeks ago. Not long after that the car started racing at the Sebring International Raceway. After a few weeks of lapping the track there, the DeltaWing will go to Atlanta, then be shipped to Europe for further testing and development.

Some might be wondering “What makes the DeltaWing special?” It is half the weight and has half the aerodynamic drag of current conventional race cars. It also features a highly-advanced and hugely-efficient Nissan 1.6-liter four-cylinder engine, featuring direct gas injection and a turbocharger.

The people behind feel the DeltaWing feel this could change race cars and conventional vehicles alike.

The initial prototype was built by Dan Gurney's All American Racers group in California. However, several other key racing organizations and companies are taking part such as Panoz, DeltaWing designer Ben Bowlby, and Duncan Dayton from Highcroft Racing. The DeltaWing program was originally launched at last year's 24 Hours of Le Mans by these same people. Nissan is additional partner for this year's race.

"We've been able to make some adjustments to the car and we will continue to do so right up to the green flag at Le Mans.” said Ben Bowlby, Nissan's Deltawing Concept Originator.

Panoz's EMT organization have been working on fine tuning components and bodywork. They have been using the lessons learned from the initial tests at Buttonwillow in California and the Sebring to refine the Nissan DeltaWing.

"It is what is needed in racing. We need to let go of the past and look forward to better fuel and tire efficiency without sacrificing any performance.” said Don Panoz, one of the managing partners on the DeltaWing project. "The fact the car is so different looking has attracted so much attention but the reason why it looks like it does is because that is what is needed to produce these kind of results.”

The Nissan DeltaWing is going to debut at this year's 24 Hours of Le Mans, the famous French endurance race, as an additional 56th entry. This is a spot reserved by the event organizers for vehicles featuring new and innovative technologies, but won't be officially competing. This allows designers and engineers to test their cars against others, without worrying about conforming to the current racing regulations. The DeltaWing will not be eligible for any trophies and will carry the race number ‘0’.

Michelin is also backing the Nissan DeltaWing by embedding personnel in the program with the car. The DeltaWing uses special tires development just for it, and has never been used in any other international sportscar competition. The front tires on the Nissan DeltaWing are only four inches wide, equal to the size of a motorcycle tire.