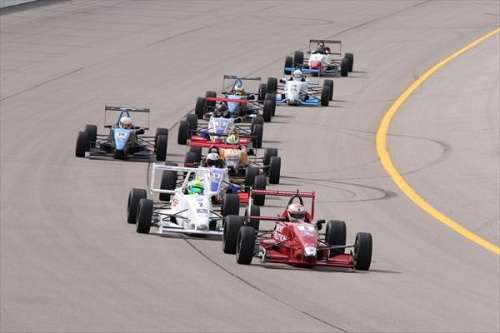 Mazda has teamed up with ESPN International to allow racing fans around the world to follow their favorite race car drivers and teams a better viewing experience with a total of 13 hours of racing scheduled to be broadcast in 2012, for the Star Mazda Championship Presented by Goodyear and the Cooper Tires USF2000 Championship Powered by Mazda.
Advertisement

These racing series includes racers from an extremely wide and diverse background. Both USF2000 and Star Mazda Championship are part of the “Mazda Road to Indy” ladder and have attracted the best up and coming racing talent from around the globe. This includes North America, Europe, South America, Africa, Australia, the Caribbean, Latin America, the Middle East and New Zealand. So basically anywhere you can think of.

This will allow these series to be viewed in more than 62 million homes in over 178 countries and territories on ESPN International.

"In past years we've had upwards of 20 different nationalities represented on the racetrack with our various MAZDASPEED development series. Now, thanks to a agreement with ESPN International and Carolinas Production Group, those countries can watch their best racers compete to move up along the Mazda Road to Indy" said Jim Jordan, Alternative Marketing Manager for Mazda North America.

In 2006 Mazda established the MAZDASPEED Motorsports Development Ladder to assist racers in moving up through the racing ranks. In 2010 this was expanded to include the Mazda Road to Indy series. Key to Mazda's success are partnerships with the Skip Barber Racing School and Mazda Raceway Laguna Seca.

Rick Benjamin's Carolinas Production Group will handle production and distribution of the racing series content. Rick will also comment on the broadcasts with IZOD Indycar driver, and Mazda alum James Hinchcliffe, along with Todd Lewis in the pits.

"We at Carolinas Production Group are thrilled to have ESPN International on board to carry the 13 telecasts showcasing the Mazda Road To Indy during 2012...We know how popular these key open wheel formula are world-wide, and we can't wait to get started at St. Pete in a few weeks highlighting the amazing talent in these two series." said Rick Benjamin. He emphasized that they will be featuring all 10 weekends of Star Mazda action, plus action from 5 weekends of racing in USF2000. Quite a lot of racing, but I'm sure it will be a lot of fun to watch on ESPN International.

This announcement only solidifies Mazda place in the racing world. Mazda is the number-one brand for road-racers all across North America. Thousands of Mazda powered racers compete in various classes with the SCCA (Sports Car Club of America) and NASA (National Auto Sport Association ). This is highlighted by Spec Miata, the world's largest spec class with over 2,500 cars built. Mazda knows how to build great cars for great racing!