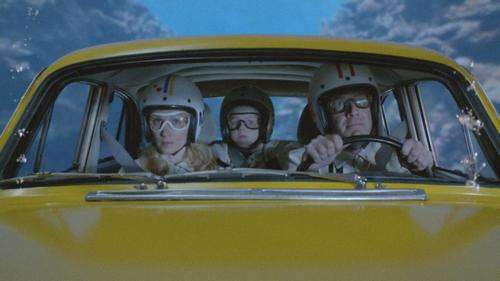 Hyundai is going to be the exclusive automotive sponsor for the 84th consecutive Academy Awards for a fourth year in a row. This means Hyundai will be airing some interesting and fun commercials.
Advertisement

The Academy Awards, which will broadcast on Sunday, February 26 on ABC will showcase some of the biggest stars in Hollywood that appear on the silver screen. On the smaller screen, your TV, Hyundai will show a total of nine ads throughout the Academy Awards. There will be two pre-show commercials and seven during the actual awards ceremony. This comes just after having several successful commercials for the Super Bowl.

“Modern Life” recreates a a confused dad preparing dinner for the family. He is receiving instructions from his wife over the phone as she’s “stuck in traffic” all while kids play in chaos in the background. As the camera pans outside you see that the wife is actually in the driveway enjoying her quiet time in her Azera. The comfort, refinement, and solitutde of the Azera it seems is just too hard to resist.

“Talk to My Car” plays on the long history of moviemakers that creatively integrate voice-activated vehicles into their productions, even before such technology really existed. Different eras of film are represented in the timeline and evolution of talking cars in movies. From a flying car to an underwater car to a spy car. In typical Wes Anderson fashion, the vignettes look as if they are plucked from vintage footage but all were recreated for this spot. The scene closes on a family driving in the all-new Azera, using the voice-activated Blue Link system as they go about their daily routine.

In addition to the Wes Anderson-directed ads, two more brand new spots featuring Azera, “Action” and “Thanks”, were made just for the Academy Awards. These spots will run only during the awards show. Hyundai’s campaign also includes several animated billboards throughout the show, also showcasing Azera.

“Hyundai is proud to share the spotlight with Hollywood’s biggest names on Oscar Night and is excited to introduce the award show’s huge national audience to the all-new Azera,” said Steve Shannon, vice president of marketing for Hyundai Motor America.

Obviously the new Azera will make its debut at Hyundai dealerships shortly after this year’s Academy Awards. The Azera features a powerful 3.3-liter V6 engine, six-speed transmission, best-in-class combined fuel economy of 23 miles per gallon and a wide range of advanced safety equipment.

If you are interested in seeing additional behind-the-scenes footage for some of these commercials check Hyundai’s YouTube Channel. Some of the commercials will be posted following the Academy Awards on Monday, February 27.