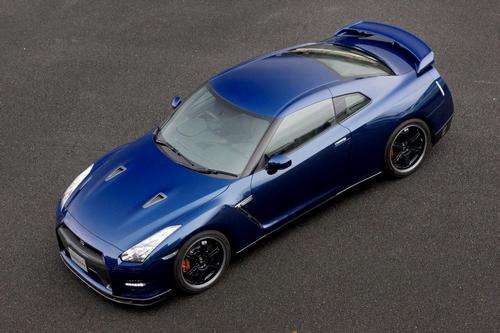 The 2012 Nissan GT-R is one the fastest cars in the world, and is considered an engineering marvel. The GT-R delivers stunning technology, power, handling, and performance. Now you can have even more, with the new Track Pack edition of the Nissan GT-R, which will be outfitted for race track performance .
Advertisement

Since GT-R owners are some of the most demanding in the world, it made sense for Nissan to take the already unbelievable performance of the Nissan GT-R to the next level. The Track Pack version of the GT-R is for serious driving enthusiasts who want an extra edge on the race track or to experience the road even better.

The exterior of the GT-R Track Pack is easily identified by lightweight six-spoke RAYS-alloy wheels with gloss black painted centers.

The brakes behind these are cooled by additional cooling ducts built into the front bumper. These reduce the operating temperature of the front brake discs by as much as 100 degrees during track use, improving the stopping performance. Similar ducts, hidden behind the rear wheels, channel cooling air over the rear discs.

To reflect this GT-R’s harder edge, the suspension’s spring rates have been revised to be optimal for track use. Like all GT-Rs though, the dampers are adjustable to offer more comfort when the car is being used on the road.

On the inside, Recaro front seats are trimmed with blue bolsters and an innovative high grip material to help keep the driver in place during hard cornering and braking. The rear seats have been removed to save weight. A ‘Track Pack’ emblem on the center console identifies this model as a special GT-R.

The engine retains the same specifications as the ‘regular’ 2012 model GT-R, which means 550HP of power. The 0-60 mph time is a ridiculous 2.7 seconds.

Even though this new GT-R offers a harder edge and more intense performance, surprisingly it still remains fully road legal. Quite an impressive feat for the Nissan engineers and NordRing of Japan, which co-developed this most impressive iteration of the GT-R along with Nissan.

Unfortunately though those interested in purchasing a model here in America... will not be able to. The 2012 Track Pack Nissan GT-R will only be available and built in Right-hand drive, for the Japanese and UK markets. Too bad for US!