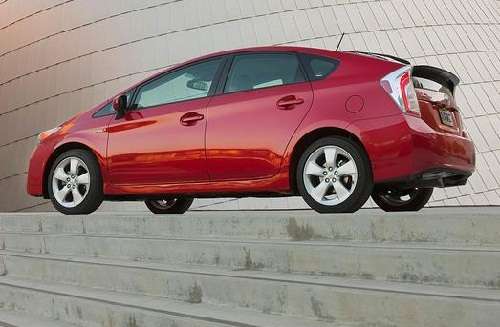 Toyota Motor Corporation (Public, NYSE:TM) is on to its second million in sales for Toyota Prius, the best-selling hybrid in America bringing some fun to its 2012 model.
Advertisement

The 2012 Toyota Prius is available in several trim models as the third generation Prius and up trim levels, Two, Three, Four and Five. Each trim level is getting upgrades for 2012.

Three: navigation and Entune, plus a backup camera display, Sirius XM Satellite Radio capability, HD radio TM with iTunes® Tagging, advanced voice recognition and text-to-speech with programmed and customizable text responses. Entune, applications and data is complimentary for three years and is connected through the owner’s smart phone once it is connected through Bluetooth or a USB cable.

Five: Advanced Technology Package includes all of the above plus radar cruise control, pre-collision seatbelt retraction and automatic braking when it detects an unavoidable crash and lane departure warning. It can accept Toyota’s Racing Development sport package.

Toyota’s third generation Prius has an improved fuel economy of 48 highway/51 city with noted improvements in cold starts and at higher speeds.