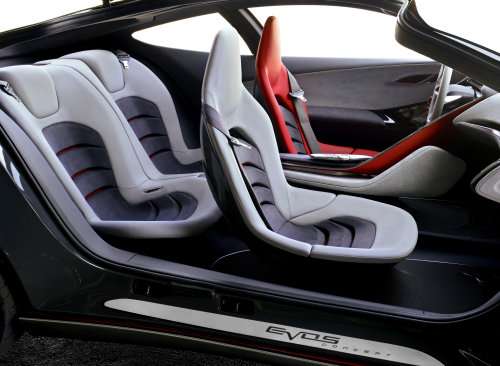 The 2011 Frankfort Motor Show was a grand success in revealing some of the best new up and coming small cars of the future. Ford was right there to share its forthcoming ideas, including the Focus ST and the Evos.
Advertisement

The Ford Focus ST made a hit at the Frankfurt show as did the Evos concept. However, the Evos concept was just a tease to Ford enthusiasts because the great idea the viewers seemed to love, is not quite ready for production as of yet.

The Evos was described as a striking small sedan with all four doors being full gullwing doors. The front-end styling was described as having a marked grille, headlights with detailed designs, and great side profiles and tail. According to the Ottawa Citizen, the Evos will “put the company at the forefront of automotive design” and even J Mays, Ford's global design chief, hints strongly that the first cars to bear at least some of the Evos' nextgeneration ‘kinetic’ styling language will be shown at the North American International Auto Show in Detroit.”

The other Ford model that made a huge splash at the 2011 Frankfurt Motor Show was the Focus ST (Sport Technologies). The plan is for the Focus ST to eventually arrive in North America for Americans and Canadians to benefit from its great powertrain. The vehicle boasts to have a 2.0-litre EcoBoost fourcylinder engine According to Ford, there will be more information about the engine next week.

With this engine, the use of high-pressure direct injection and a turbocharger promises to provide an astonishing 246 horsepower and 265 pound-feet of torque, which should give other smaller vehicles a run for their money. Canadians will most likely be receiving a five-door version of the Ford Focus ST and the wagon version will stay in Europe. Overall, the car boasts what many car enthusiast love; speed, agility and utility.

There were a few other Ford models that were revealed at the Frankfort Motor Show. The second concept Fiesta ST was there featuring a sport-tuned chassis, six speed manual gearbox and a highperformance 1.6L EcoBoost engine that claims to push 177 hp and 177 lb ft of torque. This vehicle is said to be able to propel from 0 to approximately 62 mph in less than seven seconds.

With both the Ford Focus ST and the For Evos concept, the brand gave car enthusiasts even more about which to buzz. For those who prefer smaller cars, these two seem to definitely fit the bill. It’s just a matter of time before they hit showroom floors.

LG's New EV Battery Plant Is a Welcome News for Tesla
Tesla Giga Berlin's New Hurdle: It's Not Only the Gov't, but Now Tesla Itself
END_OF_DOCUMENT_TOKEN_TO_BE_REPLACED