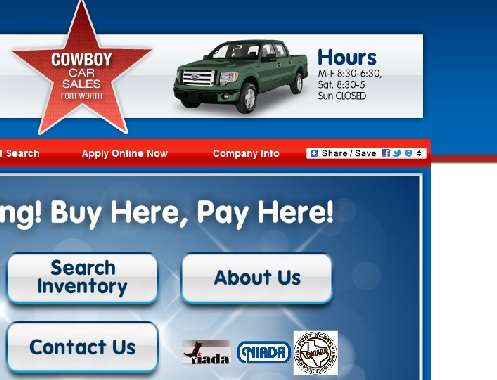 A Spike Television (VIAB, Fortune 500) new reality series will soon be on the air to show what struggling car dealerships are going through during these rough economic times. The television show’s working title is Car Lot Cowboy.
Advertisement

The reality television show’s mission is to try to help these struggling car dealerships turn their businesses around for the better. Auto dealers all over the country have been losing money and even hundreds have been closing down over the last couple of years. Still today, things are not going too well for the dealerships that are still trying to stay alive or even to thrive. Sales are down, the economy has only gotten worse, customers are more difficult as they look for deals on the cars they want -- and morale in the dealerships suffers because of it all.

So, yes, it’s been a rough few years for auto dealers and that’s where Spike Television is coming to help. Car Lot Cowboy, will feature an auto sales consultant named Tom Stuker. The show will follow Stuker as he attempts to turn deteriorating dealerships into profitable businesses in less than a week’s time. Actually, he’ll do it on the show in just five days.

Stuker will bring along with him a team of people who are experts in all aspects of the automotive business. Stuker himself is an expert in sales, but he will need others who specialize in parts, in car service, customer service, in greeting customers when they first walk in the door – the list goes on and on. All these people are needed in a car dealership in order to make it run smoothly and turn into a profitable business.

The Spike Network made the following statement in an announcement about the show, “His [Stuker’s] blunt talk may rub some of the salespeople the wrong way, but his tough-love approach and keen sense of the business ultimately delivers unmatchable success." Sounds like a great person to build a company from failure to success.

Spike has also said that Stuker has worked very successfully outside the auto industry as well, so he brings great business sense with him to the dealership and hence, to the reality show. Stuker is most famous as the first man to earn 10 million United Airlines frequent flyer miles; however, more fitting for the show, he has worked with over 1,500 auto dealerships.

Spike TV spokesman David Schwarz shared that two episodes of Car Lot Cowboy have already been filmed, the last one in New Jersey. The information for this television reality show has been brought to the public by CNNMoney.com. There has not been a release date set as of yet and the show does not appear on IMDB. We’ll wait for more information that will hopefully be forthcoming.