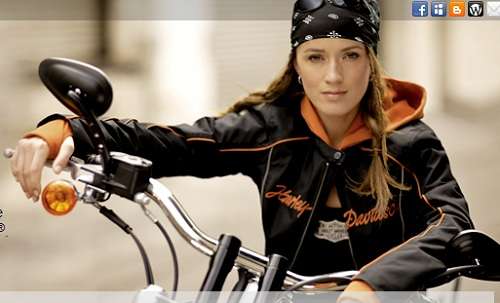 This is an exciting week for the Harley-Davidson motorcycle brand and four amazing women because it just launched a new and thrilling video series. The series is entitled My Time to Ride.
Advertisement

My Time to Ride features four extraordinary women who started with a dream and made that dream into a reality. Their journey towards fulfilling their desire was an emotionally charged one with its obvious ups and down, but in the end, these women proved that with a realistic goal, tenacity and hard work, anything is possible.

Katie, Roshani, Gabriella and Laurie were relatively ordinary women with relatively ordinary lives. One day that all changed when they left their everyday life routines and went off to do something that many others would never even think to attempt.

The women moved to discover the major freedoms that life has to offer as they took off on the open road as new Harley-Davidson riders. The six-episode series follows these motivating women on their journey and shares their life-changing experience on tape for the world to witness. Yes, major transformations happen to people when they decide to make massive all-encompassing life changes; and this includes Katie, Roshani, Gabriella and Laurie, who one day decided they were all going to learn to ride a motorcycle.

In a press release, these four women were called “charismatic and motivated.” Once you see the videos, you’ll see why. The series is available at www.harley-davidson.com/mytime.

How did these four women get chosen to be the subjects of this great new Harley-Davidson video series My Time to Ride? It all started when they won a nationwide contest that the Motor Company hosted this summer. There were over 35,000 people who entered the contest with descriptive essays of the reasons they wanted to learn to ride a motorcycle.

After all entries were received, only four winners were chosen. They were sponsored to travel to Milwaukee, Wisconsin, with a guest, to take a Harley-Davidson Rider's Edge New Rider course. They also were lucky enough to be mentored by current female motorcycle riders, as well as Motor Company representatives. That’s not all though. Each of the four winners also won a brand new 2012 Harley-Davidson motorcycle that they were permitted to personally customize to their liking by using H-D1 Factory Customization.

Claudia Garber, the Director of Women's Outreach at Harley-Davidson made this statement in a press release: "This series captures some amazing life transformations as these women find the liberation that can only be found on the road, from the seat of a Harley-Davidson motorcycle. Learning to ride a motorcycle is a powerful life-changing experience, and this comes through in these videos. We hope these four women will inspire other courageous women to take the first step toward learning to ride."