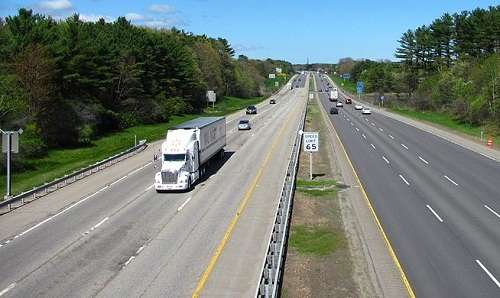 Residents and visitors of the state of Maine are going to be very excited when they find out about the new increased speed limit in the state. Especially those who love to drive fast on the highways, fast drivers are now in luck with the new 75 miles per hour speed limit.
Advertisement

Authorities, as of Thursday, have bumped up the speed limit for a section of Interstate 95 in the northeastern corner of the state. Other states in the Midwest, such as Texas have done better, but this is a start for the east coast and it’s doubtful that any driver will complain. Being able to drive at a faster speed on an interstate, especially when it’s relatively desolate, make a road trip much more pleasant. So, drivers on the section of I95 who can go faster now, think this is an improvement.

It may only be approximately 110 miles of the interstate 95 that is subject to this change. Shaving any time off a long road trip is a positive thing for most. So, Maine drivers are celebrating the law that was passed just today. They do have to realize; however, that the law won't actually go into effect for Maine drivers until the new signs are posted along the route, according to the Boston Herald. This is the same in every state when speed limits are changed.

Maine made its decision to up their speed limit on 110 miles of I95 because of the lack of drivers on that stretch of road. The part of I95 in Main is a long and relatively unpopulated stretch without anything but trees. Law enforcement knows that drivers are already going faster than 65 miles an hour (the old speed limit), so why not push the limit up another 10 miles per hour to be 75 miles per hour.

The only for-seeable issue is now that the speed limit is 75 miles per hour, motorists will be jacking that speed up at least another 10 miles an hour and hence, will be driving 85 or even 90 on the interstate in Maine. The Maine Transportation Department (MTD) commissioned a study and found that 85 percent of drivers were traveling the route at 74-75 mph. That 85 percent figure is critical, because that's how the department decides its speed limits, seeking to match the behavior of the majority, according to MTD.

Patrice Goodwin wrote on September 29, 2011 - 4:45pm Permalink
I used to live in Lincoln and then Lee, Maine. Yes, it is tree, trees, trees, but also moose , as I recall, on that stretch. Watch out for the moose!
Car Guy wrote on October 1, 2011 - 9:02pm Permalink
Drive carefully people. Main speed limit is now too high for so many trees. Do you think this trend will continue and spread nationwide? I mean, raising the speed limit.