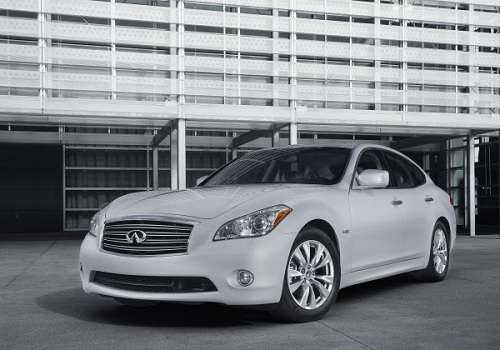 The 2012 Infiniti M35h hybrid has officially been named the world’s fastest full-hybrid car. It has been certified by the 2013 Guinness Book of Records and will be listed in the next edition.
Advertisement

According to Infiniti, this unbelievable quarter-mile time for a fully hybrid, gas/electric car, ranks the 2012 Infiniti M35h up there with the performance of a 1982 Lamborghini Countach S and a 1998 BMW M3. Infiniti also shared that the M35h can hit 62 mph in just 5.5 seconds. That is just about as fast as the performance of a 2011 BMW 335i sedan.

The 2012 Infiniti M35h sets the Guinness Books World Record for being the fastest full hybrid car of gas and electric for the Acceleration Benchmark which was set over a standing quarter mile. Yes, the M35h has made history, and most likely to the surprise of many car enthusiasts who would never believe a hybrid could be on par with luxury high performance vehicles like the Lamborghini, BMW, and within a few tenths of some Porsches, Ferraris and Aston Martins.

The 2012 Infiniti M35h may be fast and furious; however, it still boasts an EPA rating of 27/32 mpg for city and highway driving, respectively. That makes for a highly efficient vehicle to add to its eco-friendly characteristics.

CAR Magazine associate editor Tim Pollard at Santa Pod Raceway in the United Kingdom was the driver who set the record for the 2012 Infiniti M35h as fastest hybrid in the world. The record was officially set on August 23, 2011 at the UK’s Santa Pod Raceway, home of the FIA European Drag Racing Championships.

Pollard is responsible for listing the vehicle in the 2013 Guinness Book of Records. The quickest standing quarter mile run took just 13.896 seconds and adjudicators from Guinness World Records were right there to witness the run and help verify the world record. Out of many runs, the average speed was clocked at 13.9031 seconds.

Tim Pollard shared in a statement: "The Infiniti M35h proves that hybrids can be fast as well as frugal. At Santa Pod you could feel the instant torque of the electric motor away from standstill – the car just leapt off the line. I did try changing gears manually, but it was fastest left in automatic. That was when we achieved the fastest single run of 13.8960 seconds. But what impressed most was the Infiniti M's duality of purpose: it might be quick, but it's also comfy and very easy to drive. It felt like it could do these runs all week long.”