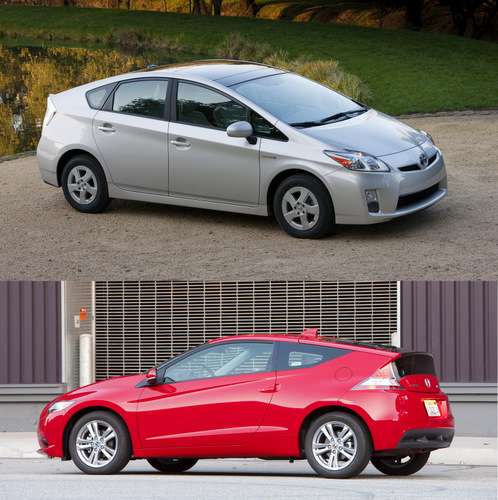 Toyota and Honda are coming up from rock bottom

The two automakers hardest hit by the Japan earthquake in March, Toyota and Honda, are finally beginning to see the light at the tunnel: market share is once again on its way up.
Advertisement

Toyota and Honda are finally emerging from the massive setbacks as a result of the earthquake in Japan, with inventories of new cars beginning to rise. Toyota is once again increasing its domestic output and will be working its plants in North America overtime to appease idle dealers who are running out of new cars to sell. Honda is back up to full production in North America (with the exception of the Civic) as of August 1st, and Japanese production is at 95% of normal.

Toyota's and Honda's outlooks on the 2011 fiscal year were rather bleak thanks to the four-month strain on new-car supplies, with Toyota sales down 23% for July 2011 versus July 2010, and Honda sales down 28%. Other Japanese automakers saw less severe, but still significant, losses, such as Subaru which lost 9% of July sales. American and Korean automakers with more plentiful new-car supplies have picked up the slack from the Japanese automakers' troubles, with Chrysler gaining 20% July sales, Ford gaining 13%, and General Motors 8%.

"Whoever has the cars outsells everybody," according to Ralph Martinez, owner of the Town & Country Chrysler dealership in Oregon who saw a 50% sales jump last month. "People are out there buying, [and] they're going to places that have a good selection."

The confidence of Toyota and Honda dealerships is beginning to resume though, as Al Hendrickson Toyota in Coconut Beach, FL, restarted his advertising campaigns on July 1st based on the promise that Toyota would be able to deliver cars for them to sell. It was a gamble, but "thankfully, they did," said Hendrickson. "We don't have as many as we want, but we have as many as we need."

Auto Detailing ... wrote on August 8, 2011 - 7:41pm Permalink
That's an amazing quick recovery considering the scope of the accident. I know that the Prius is very much in demand right now because of insane high gas prices; everyone seems to want to get their hands on one and I read that dealerships were sold a while ago.