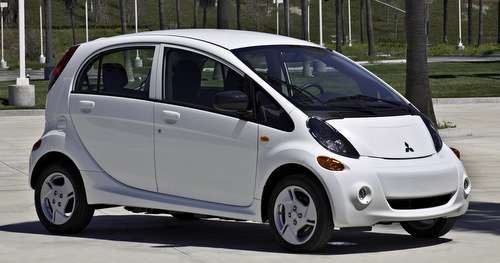 The Mitsubishi i, which comes Stateside in November, will be the cheapest 100% electric vehicle in the country at less than $30k to start.
Advertisement

Mitsubishi is hoping that its i electric car, which will arrive at dealerships on the West Coast in November, and nationwide by the end of next year, will sell on the premise that it will be the cheapest 100% electric car in the United States. The base price of the i will be $28,840, nearly $5,000 less than the Nissan LEAF and, after the $7,500 federal tax credit and the $5,000 subsidies some states are offering, cheaper than $17,000.

The Mitsubishi i, which has been on sale as a gas-powered kei-car in Japan since 2006, is also sold as an electric vehicle called the i-MiEV in Japan and Europe. Here, it will simply be called the i. To appeal to US market tastes and conform to crash standards, the American-market i will have fender flares that will widen it by 4.3 inches. The bumpers will be bigger, the interior materials will be upgraded, and an artificial-noise system will ensure pedestrian safety.

The Mitsubishi i will have a 66hp, 145ft-lbs torque, 49kW electric motor mounted in the rear of the car driving the rear wheels. The i is rated by the EPA as having a 62-mile range, and charging can be done by either a 120-volt household outlet in 22.5 hours or a 'Level 2' 240-volt charger in 7 hours. The EPA also rates the i as achieving the equivalent of 112mpg, making it the most fuel- and energy-efficient vehicle in America.

The Mitsubishi i's projected sales figures are 2,000 units between its January launch and April, with half of them slated for fleets and the other half for consumers. Mitsubishi plans to sell 20,000 i's annually by 2016.