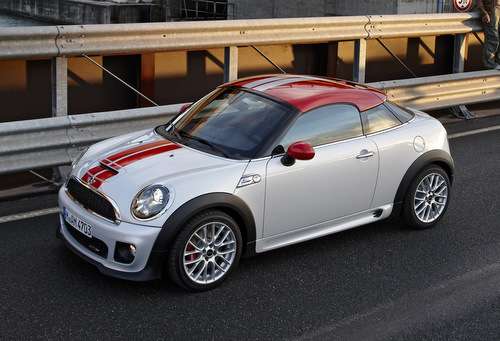 Mini will finally bring its much-anticipated two-seater Cooper Coupe to the 2011 Frankfurt Motor Show for all the world to see in person, along with a few other Mini special editions.
Advertisement

The 2012 Mini Cooper Coupe was revealed by BMW back in June, and we here at Torque News were among the first to bring you pictures. Now BMW has just announced that the Mini Cooper Coupe will make its first appearance in the flesh at this year's Frankfurt Motor Show coming up later this month. Mini has expanded its lineup quite aggressively over the past couple years, adding the versatile, if a bit awkward, Clubman wagon body style, and just recently, the four-door soft off-roading Countryman SUV body style. The two-seater Mini Coupe completes the lineup as the company's focused sports car, which Mini describes as having a "legendary go-kart feeling."

The Mini Cooper Coupe will differ from the rest of the Mini lineup by its roof design, which lowers the roofline and forms a far more extreme angle out of the rear window, which improves aerodynamics and adds a lot more style to the traditional box-shaped greenhouse that sits atop a conventional Mini hatchback. The Mini Cooper Coupe will also receive more aggressive suspension tuning that favors grippiness and response. The drivetrains will remain largely the same, with the standard Mini Cooper Coupe offering a 1.6L 121hp 4cyl engine and a six-speed manual gearbox (with a six-speed automatic as an option), and the Cooper S Coupe will be powered by the same 181hp turbocharged 1.6L engine as the hatchback. But those who desire to take the Coupe's sporty character to its limits can get the John Cooper Works edition (pictured) which will boost the Cooper S Coupe's horsepower to 208hp as well as add lots of racy styling features including stripes, bigger wheels, and a retractable rear spoiler.

Mini has also said that the availability of customization options for the 2012 Cooper Coupe will be nearly unlimited, calling it the Mini Yours collection. Customers will be able to choose wild and crazy paint schemes for their Cooper Coupes, as well as many different interior upholstery and trim options. Buyers who choose the John Cooper Works edition will be able to make their cars look and feel like race cars for the street with sportier steering wheels, shift knobs, and engine tweaks to wring even more power out of the JCW performance package.

Mini has also announced that the aforementioned Clubman wagon body style will be receiving a Hampton edition that will be shown at the 2011 Frankfurt Motor Show, which will showcase all of the various customization options available through the Mini Yours accessory catalog. Finally, the Mini Inspired By Goodwood will also be on hand at Frankfurt, which received a special once-over by Rolls-Royce, also under the control of BMW, as a tribute to the Goodwood festival which is one of the most revered automotive events in the world.

Katy Price wrote on September 5, 2011 - 12:20pm Permalink
I love it!! I want one NOW!!
Angelina wrote on September 8, 2011 - 5:31am Permalink
Wow this mini cooper is looking cool, its front body gives an look of sporty car, i would like to drive this mini cooper, soon hope to see in the street. <a href="http://www.remarkabletrucks.com/commercial_trucks.php/">Commercial trucks</a>

Tsingshan's Threat to Tesla: EV Maker Is In Battery Crosshairs
Tesla-Funded Research Reveals One of The Biggest Mysteries of EV Battery
END_OF_DOCUMENT_TOKEN_TO_BE_REPLACED