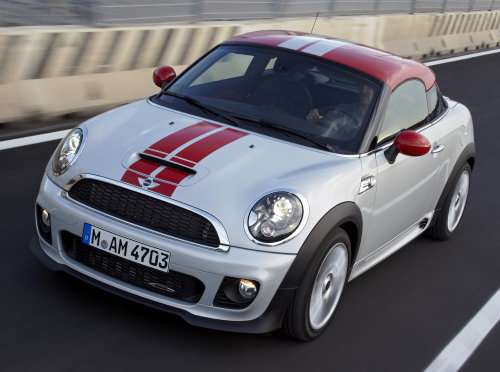 We’ve seen spyshots; we’ve heard rumors but now it is all official as today, BMW lifted the curtain on the 2012 Mini Cooper Coupe as they have offered up a huge spread of images and all of the important details on the new Mini model.
Advertisement

The 2012 Mini Cooper Coupe is very similar to its roomier 4-person Cooper along the front end but across the roofline the 2012 Mini Coupe clearly differentiates itself from the slightly original, modern Mini Cooper. The 2012 Mini Cooper Coupe is the first of the lineup to feature the new "three-box" design concept, with the roof, wraparound glass greenhouse and vehicle body designed as three separate “boxes” on a horizontal plane. The result is a Mini 52 mm lower than the traditional Mini Cooper and a wide, aggressive stance that just screams ‘sports car’. Thanks to the addition of the forward-shifted roofline and the deletion of the second row seating area, Mini has added an active rear spoiler that rises out of the rear panel when the car hits 50mph and drops back down when the speeds drop below 37mph. In the case of the 2012 Mini Cooper Coupe John Cooper Works (JCW) models like show on the right and in the gallery below, it receives a handful of aerodynamic changes to allow it to stand out from the non-JCW models like the chin spoiler that flows from the front end and up into the wheel flares.

Those who want a touch more kick and a little sportier styling can opt for the 2012 Mini Cooper Coupe John Cooper Works Edition. The JCW Coupe adds a similar turbo and direct injection setup as the Cooper S Coupe but with special tuning this premium package churns out 208 horsepower and 192lb-ft of torque with an overboost feature of its own; shoving the torque output up to 207lb-ft from 1,700 through 4,500 rpm. This drivetrain setup in the 2012 Cooper Coupe JCW allows this compact 2-seater to rip from 0-60 in just 6.1 seconds while hitting a top speed of 149mph. While the acceleration numbers might not be too breathtaking, there is a good chance that this light, low Cooper Coupe does the majority of its talking on a track with turns so acceleration only plays a small part of the overall role.

Check out the gallery below for a closer look at the 2012 Mini Cooper Coupe (shown in John Cooper Works trim).

boydfoose wrote on September 16, 2011 - 2:52pm Permalink
The great mini can be small but in terms of performance it can outrun any competition! Anyway BMW made the car with great detail including high performance <a href="http://www.autopartswarehouse.com/mini~rep.html">Mini Parts</a>.