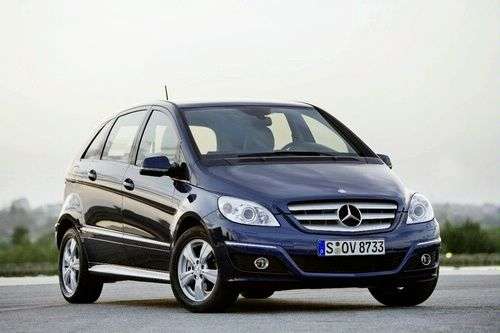 Mercedes-Benz is considering importing all variants of its A-Class and B-Class compact vehicles to the United States in 2013 to help meet upcoming fuel economy standards.
Advertisement

Mercedes-Benz may be bringing both its compact A-Class (pictured) and B-Class cars to the United States, according to Daimler AG CEO Dieter Zetsche. Mercedes-Benz won't give full details, but the first US models will go on sale in 2013. The second-generation B-Class, which is being featured at the Frankfurt Auto Show this week, will feature an all-new four-cylinder engine with direct injection and turbocharging.

Mercedes-Benz is planning to sell compact cars like the A-Class and B-Class cars here in America to comply with the upcoming fuel economy standards, as well as expand sales volumes. However, Mercedes-Benz is not releasing estimates of how many they plan to sell here.

Prices haven't been announced either, but when the new-gen B-Class goes on sale in Germany later this year, it is expected to sell for around 35,500 US dollars.

The B-Class engine range will consist entirely of four-cylinders, with displacements from 1.6L to 2.0L. Mercedes-Benz says that the 1.6L engine could make it to the US, but that there won't be any diesel-engined B-Classes Stateside. We won't get the plug-in hybrid B-Class, known as the E-Cell Plus, either, according to Joerg Prigl, vice president of Mercedes-Benz' and Smart's front-wheel-drive and electric vehicle development.

Mercedes-Benz will also consider supercharging the bigger 2.0L engine for up to 300hp, which would make a six-cylinder engine unnecessary, and four-wheel-drive would likely be used on that model, which may be badged as the AMG version.