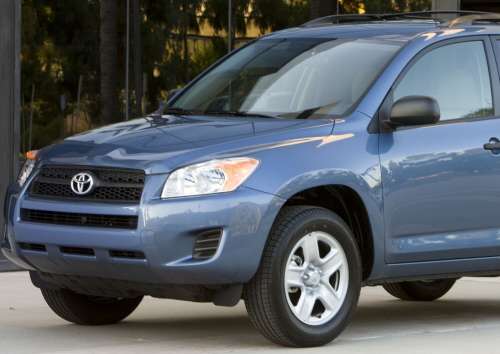 Toyota ramps up production big time on 2012 cars and trucks

Toyota’s production of 2012 cars and trucks for sale in the United States and Canada is at 100% and recovery from the March 11 quake in Japan has exceeded expectations, an executive for the Japanese car company told reporters in Los Angeles today.
Advertisement

The initial forecast was for normalcy in building 2011 and 2012 Toyota cars and trucks by "November or December," said Steve St. Angelo, executive VP of Toyota Motor Engineering & Manufacturing.

St. Angelo's remarks confirm 100% production of the Tacoma, Tundra, RAV4 (pictured) and Lexus RX 350 is under way. In June, Toyota confirmed production schedules were going full tilt for eight other models sold in the U.S.: The Avalon, Camry, Corolla, Matrix, Highlander, Sienna, Sequoia and Venza. Together, these vehicles account for 70% of Toyota’s American sales.

With Japan-based production also restored to normal levels, Toyota is now focusing on replenishing dealer inventories through overtime and Saturday shifts, St. Angelo said. Production levels in the fourth quarter will be 15% higher than forecasted prior to the devastation in Japan, he added. That means more money in the pockets of American auto workers as Toyota plays hurry up to assemble more vehicles and then move them out to rebuild showroom sales.

“The recovery is a testament to the dedication and commitment of our North American team members, suppliers and business partners," St. Angelo said. "All of us at Toyota greatly appreciate the patience and support of our customers and dealers, many of whom have made generous donations in support of the relief efforts in Japan.

“Looking ahead, we’re excited about our extensive product launch schedule over the coming months. ... I have no doubt that our team continues to be focused on building the highest quality vehicles for our customers.”

-- Announced that its plant in Huntsville, Ala., begins production of 4-cylinder engines this month for the Camry, Highlander, RAV4, Venza and Sienna. Workers there already make 6- and 8-cylinder engines for trucks.

-- Confirmed that production of the Corolla is on schedule and will begin in October at the company's 14th North American plant in Mississippi.

-- Reiterated that is continuing to hire auto workers in Mississippi. The company plans to hire 2,000 "team members."