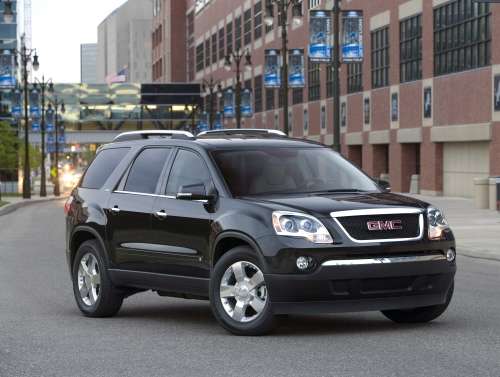 NADAguides today put out its Most In Demand Vehicles Report – a list of the best new cars and trucks that sell well and are highly sought but are hard to find because factories are barely keeping up with demand. The list, which caters to discerning buyers who are driven by value, also identifies vehicles of similar quality and price, with greater availability.
Advertisement

Making up the latest Most In Demand Vehicles list are six new 2011 vehicles. They are the Ford Explorer, Honda Civic, Hyundai Elantra, Hyundai Sonata, Kia Sorento and the Toyota Prius.

NADAguides also identifies a list of similarly priced, alternative 2011 models that are more readily available than those harder-to-find ones. They include the GMC Acadia (pictured), Mitsubishi Lancer, Suzuki SX4, Nissan Altima, Mazda CX-7 and Honda CR-Z.

"Our Most In Demand Vehicles Report aims to provide insight into the current supply and demand of popular new cars," said Troy Snyder, director of product development at NADAguides.
"By bringing attention to the most wanted vehicles on the market that are currently in short demand, and offering alternative options, car shoppers are able to use this information to save time, understand what is currently available on the market, find vehicles that are readily available and not only find a vehicle that handle their specific needs and wants in a new car."

To determine the Most In Demand vehicles, the organization says it first compiled a list of the 25 most in demand vehicles currently on the market based on overall industry sales during the month of April 2011 as well as consumer interest on NADAguides.com. Then, taking into account current days-supply of vehicle inventory, NADAguides narrowed the report to those vehicles that had less than 30 days-supply of inventory availability as of the end of April 2011. Day supply means the number of units currently in inventory divided by the average number of unit sales of that vehicle per month. The result is the estimated number of days of supply of that particular vehicle.

According to NADAguides, year-over-year sales for the Ford Explorer grew by nearly 138%, helping it rank No. 22 22 in overall industry vehicle sales in April. Coming in at 14 in consumer interest on NADAguides.com during that same time period, the Explorer had 29 days-supply of vehicle inventory as of the end of April. MSRP for the Explorer starts at $28,360. The alternative is the GMC Acadia, which has a 68 days-supply of inventory.

The Honda Civic stayed relatively consistent in year-over-year sales with an increase of just over 7%, ranking as the No. 5 overall most purchased vehicle in April. Coming in at 23 in consumer interest on NADAguides.com during that same time period, the Civic had 23 days-supply of vehicle inventory as of the end of April. MSRP starts at $15,805. An alternative is the Mitsubishi Lancer, which starts at $15,195 with an 88 days-supply of inventory.

The Sonata’s year-over-year sales increased more than 17%, ranking eight in overall vehicle industry sales during April. As the most researched vehicle on NADAguides.com in April, the Sonata had 27 days-supply of vehicle inventory. MSRP starts at $19,395. The Altima is similarly priced (starting at $20,270), with a 64 days-supply of inventory.

The venerable Prius ranked 23 in overall vehicle sales and remained relatively consistent year-over-year from April 2010 to April 2011, decreasing by less than 1%. Also ranking at 23 in consumer interest on NADAguides.com during that same time period, the Prius had a 10 days-supply of inventory by April's end. The Prius starts at $22,120. An alternative is the Honda CR-Z, starting at $19,345 with a 69 days-supply of inventory.

You can reach Hawke Fracassa from TorqueNews.com at [email protected]