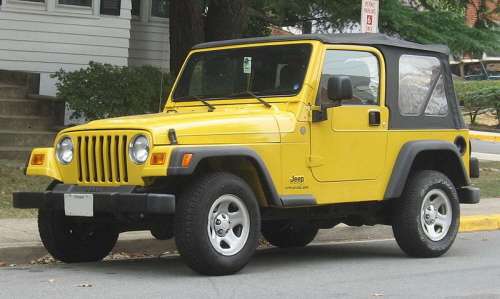 President Obama got the red carpet and as much pomp and circumstance as a king Friday as auto workers and others in Toledo serenaded him with cheers and adulation for his role in providing billions of dollars in federal bailout loan money that salvaged many of their jobs during one of Chrysler's bleakest hours in 2008.
Advertisement

“We are thrilled to be in Toledo. ... We’re going to go see some Jeeps being made,” Obama told a pool reporter.

There are 1,700 workers at the assembly plant. Toledo also is home to more than 3,000 people who work for suppliers that provide parts to make the Wrangler.

On his way to the Chrysler plant for a tour and to make a speech, Obama pool reporter Larry Vellequette of the Toledo Blade said the presidential entourage.stopped at Rudy’s Hot Dog restaurant on Sylvania Avenue and spent about a half hour eating and meeting the surprised owners, Harry and Andreas Dionyssiou, and 25 customers. Workers screamed with excitement as a crowd outside the eatery cheered.

Obama stood and talked with customers as he ate.

The president also met two employees from Chrysler supplier Faureicia, which makes parts for the Liberty and Nitro at the local assembly complex. “Keep up the good work,” Obama told them.

At the plant Obama watched over the Wrangler assembly line. He saw instrument panels being installed and front grilles being attached as Plant Manager Mauro Pino looked on.

Among auto workers he met were Nicole Jones, who wore a “President Obama” Obama T-shirt that said "Thank you" on the back.

“Those are awesome T-shirts,” Obama said before posing for photos with workers.

The president, before leaving Toledo, bought two pair of green garden gloves at Fred’s Pro Hardware on Stickney Avenue and Pearl, which is frequented by Chrysler workers. When asked by an employee about the gloves, Obama told the worker his wife "doesn’t let me near the garden.” Then Obama walked into the street and was greeted by about 150 enthusiastic people who were very glad to see him.

James Johnson, 55, shouted to others in the crowd, “I shook the president’s hand. I’m not going to wash this hand, ever.”

Obama was successful in getting feedback from people on the resurgence of the auto industry and the impact it would have had on the community had Chrysler not gotten $10.6 billion in bailout aid from Canada and the United States.

One topic on his agenda was jobs, and many people showed appreciation to him for helping to save theirs. The industry had lost 400,000 auto jobs by the time Chrysler and General Motors had filed for bankruptcy. Since June 2009, the two car companies have hired 115,000 people as part of their comeback, showing the most job growth in the industry since 1998.

Without the bailouts, some 1 million more jobs could have been deleted from auto company payrolls, according to research conducted by Obama's White House staff, so the loans in essence forestalled an economic bloodbath.

Last week, Obama praised Chrysler for repaying the last $7.6 billion it owed the federal government and Canada six years ahead of schedule.

"Chrysler’s repayment of its outstanding loans to the U.S. Treasury and American taxpayers marks a significant milestone for the turnaround of Chrysler and the countless communities and families who rely on the American auto industry," Obama told reporters.

"Supporting the American auto industry required making some tough decisions, but I was not willing to walk away from the workers at Chrysler and the communities that rely on this iconic American company.

"I said if Chrysler and all its stakeholders were willing to take the difficult steps necessary to become more competitive, America would stand by them, and we did. While there is more work to be done, we are starting to see stronger sales, additional shifts at plants and signs of strength in the auto industry and our economy, a true testament to the resolve and determination of American workers across the nation."

You can reach Torquenews.com's Hawke Fracassa at [email protected]

shellyezzell wrote on June 4, 2011 - 1:55am Permalink
A simple secret to reduce your auto insurance Call your insurance agent or the company and let him know you are "Thinking" of moving your policy since it is high, most of the time they reduce the rates check "Auto Insurance Clearance" website for more tips.