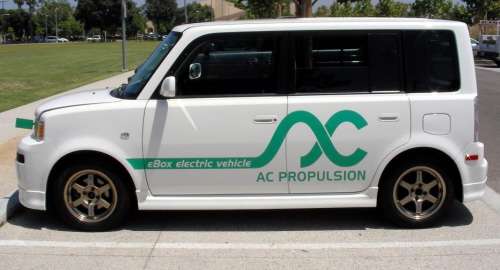 The San Dimas, Calif.-based company, which makes specialty eBox electric cars from those trendy Scion xB bodies, said in a statement Thursday it is "excited to join the ongoing discussions about electric vehicles and related topics."

AC powers and sells the eBox (pictured), repackaged from mainstream Scion xBs by AutoPort Inc. of New Castle, Del. The first refitted car owned by Hanks, now 5 years old and with just over 70,000 miles on it, still uses lithium-ion batteries in exceeding a 100-mile driving range with no problems. The eBox's impact has been so impressive that it became the muse for BMW's MINI EV.

AC Propulsion's statement said, in part, that "AC Propulsion is pleased to be able to share industry news, company tidbits and multimedia in real time. The company is especially looking forward to interacting with fans, advocates and media, and to learning more about others' perspectives on EVs and AC Propulsion."

The company created pages Thursday on Facebook and on Twitter to be able to better interact with fans and the auto press.

AC's schtick: It offers proprietary tzero technology that "is a complete solution for EVs and can be customized for every class of electric vehicle, from a sports car to an SUV to an 8-ton city bus." AC Propulsion also develops V2Gcapable vehicles, as well as the research and development of V2G technology.

With V2G technology, EVs that are plugged in support grid functions as they recharge their batteries. EV owners get paid for the use of electricity obtained from their cars.

There are 25 eBox vehicles in circulation in America and in Europe, including the one Hanks drives. Most belong to research operations at universities, utilities and car companies, but some are privately held. The cars cost $55,000 to convert from mainstream Scion xBs after they're bought new from Toyota, according to a Wikipedia report. The prototype eBox was unveiled in Santa Monica, Calif., on Aug. 18, 2006. They have a top speed of 95 mph and go from 0-to-60 in 7 seconds.