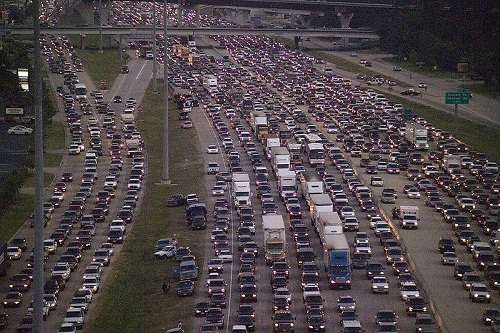 Ten worst cities for speed traps, where does your city fall

Houston in Texas is the worst city that has the most amount of speed traps. See the other major metropolitan areas where drivers should more careful.
Advertisement

Have you been traveling down a road and seen a police cruiser parked on the side of the road. What do you think he is doing? Talking on a cell phone? Running Radar? Possibly Sleeping? More then likely he is running radar to make some cash for his city. Is this wrong? Probably, but this is neither the time nor place for this discussion.

Speed limits were originally posted in the 1970’s to help drivers conserve gas during the gasoline crisis. Some cities are better at enforcing the limit at which drivers should travel while others are more lenient. Here are the worst ten cities as reported by the NMA (National Motorist Association).

Los Angeles, California starts us off at number ten. We all know LA for its traffic jams, but not for it speeding tickets. Well, apparently it needs 151 speed traps to monitor all those traffic jams. Then you’ll have to travel half way cross the country to find our next offender. Chicago Illinois uses 153 speed traps that include roadside police and traffic light street monitors. Texas actually makes this list a few times. First up is Dallas, with 156 speed traps. From Texas to Florida we find our next culprit. The city of Orlando has one of the highest tourist rates in all of America. Unfortunately, this leads police to be more watchful. Florida implements 165 traps all over Orlando. Yes, more times then not it’s some one on vacation. We travel to Colorado for our next city. Denver, to be precise, has some 175 traps. With large roads that entice drivers to travel fast, speed limits are usually not in accordance with what the speed could be on a certain road.

Its Back to Florida for the lists 5th most watched city, more specifically Jacksonville. Many motorists blame the speed limit signs saying they barely know the speed limit of many roads due to the lack of signs. The lack of signs doesn’t change the rate of speed traps, which sits at 175. Another tourist spot sits in the number 4 slot. Colorado Spring, Colorado is in possession of 186 speed traps. According to drivers police use unmarked vehicles and like Denver have wide roads that are a 55 mph zone, then upon entering the city drops quickly from 55mph to 25mph. Now for the top three, the city that never sleeps. That’s right; Las Vegas, Nevada which has 187 traps. Chad Dornsife, director of the Highway Safety Group says in the time of a budget crisis, the number of tickets written skyrockets. Now it’s back on to Texas for our top two spots. Number 2, is Austin, Texas with 189 speed traps. Finally, for the big old number one spot; Houston! That’s right Houston, Texas has an outrageous 383 speed traps. In March of last year a news channel in Houston reported police officers wrote about 3,000 tickets per day.

Is all this necessary? If we were to say the average ticket was 100 dollars, then Houston, Texas alone would make 300,000 dollars a day just off of traffic tickets. Is this harassment? Is there anything the everyday motorist can do? Just remember your speed limits and keep an eye out for those boys in blue.

Elon Musk Says Tesla To Offer Car Insurance in Texas Next Month, But These Challenges Exist
Tesla Co-Found Plans To Build a Battery Factory and Shift The Industry
END_OF_DOCUMENT_TOKEN_TO_BE_REPLACED