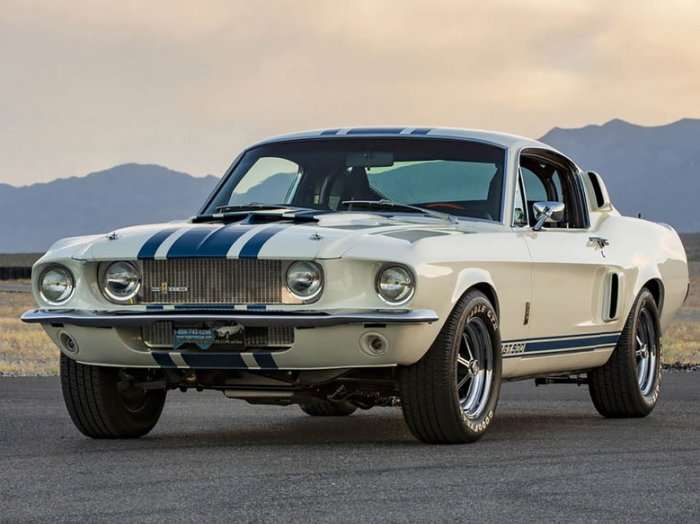 Shelby American has announced that they will sell 10 examples of the 1967 Ford Shelby GT500 Super Snake Mustang with similar features to the one-off Super Snake made back in the day, but these newly-built 1967 super-Shelbys won’t come cheap – with a price starting at $249,995.
Advertisement

Back in the 1960s, Shelby American produced a one-off car for a Goodyear demonstration that they named the GT500 Super Snake. That unique Mustang was fitted with an all-aluminum 427-cubic inch V8 from one of the Shelby GT40 LeMans-winning race cars, packing somewhere in the area of 520 horsepower.

Shelby dealer Don McCain pushed to see the Super Snake come to production, but the cost was just too high back then, so only a single GT500 Super Snake was built back then before the project was scrapped. That one car sold at auction in 2013 for $1.3-million dollars, but Shelby American has decided that now is the time to release the production version of the 1967 Ford Shelby GT500 Super Snake Mustang.

Yes, we are talking about buying a brand new 1967 Ford Mustang – or at least Shelby American will make it new before delivering the car to the buyer.

Shelby American acquired 10 examples of the 1967 Ford Mustang on which they plan to build the new GT500 Super Snake models. In addition to giving the cars a complete restoration, each one of these classic pony cars is fitted with a 427-cubic inch V8 with 550 horsepower, but this time, buyers can pick an all-aluminum engine or one with a steel block.

That powerful engine is mated to a four-speed manual transmission, with era-correct performance disc brakes under all four wheels. Of course, the cars are white with blue triple stripes and the proper Shelby badging from front to rear.

Each of these ten “new” 1967 Super Snakes will come with dash plaques signed by Carroll Shelby and Don McCain, both of whom have passed away. They each signed these plaques prior to their passing with the expectations of seeing the car come to production but sadly, it didn’t happen until after they were both gone.

With only 10 being built, they will be hard to get and with a price of $249,995, they are far too expensive for the average classic car collector, but we can expect that all 10 of these new GT500 Super Snakes from the 1967 model year will sell in a hurry.