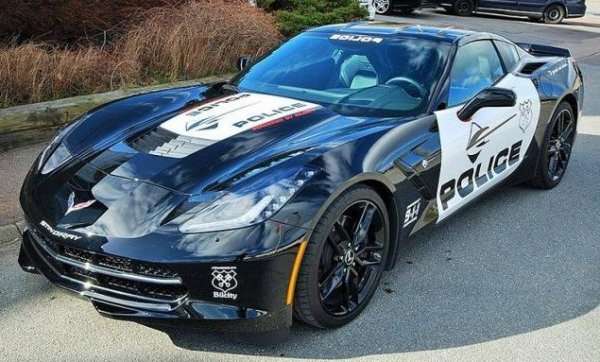 Even though the new C7 Chevrolet Corvette has been on the market for less than a year, the new Stingray is already popping up on the used car market and one particular 2014 Corvette Stingray coupe covered in a sharp looking police livery has caught my eye on the Swedish classifieds site Blocket – illustrating that the new Vette looks awesome as a cop car.
Advertisement

Just to be clear, this 2014 Chevrolet Corvette Stingray doesn’t seem to have been an actual police car anywhere in Sweden, but rather a private owner purchased the car and had it imported to Sweden. Once there, the new owner opted to wrap the 2014 Corvette Stingray in a traditional “Hollywood” police scheme with a predominantly black body, white doors, a white raised section of the hood and white police duty decals all around. This theme is clearly borrowed from the police car in the movie Transformers, which is emphasized by the slogan “To protect and enslave” on the sides and back of the C7 Corvette.

In addition to the normal badging that comes on all of the 2014 Chevrolet Corvette coupes, this car wears some addition Stingray test emblems on the front and rear of the car along with the large Stingray logo on the doors and the hood. While this package isn'tGM Drops a Big Surprise - 2015 Chevrolet Corvette Stingray Gets 8-speed Transmission - See more at: http://www.torquenews.com/106/gm-drops-big-surprise-2015-chevrolet-corvette-stingray-gets-8-speed-transmission#sthash.cly5Xdmp.dpuf all that elaborate, it definitely looks very, very cool. Honestly, I think that this cop car Corvette looks cooler than the Ford Mustang Saleen S281 that served as Barricade in the Transformers movie. Best of all, you can own it!

This 2014 Corvette Stingray police car is currently listed on the Swedish website for sale. In addition to the unique police theme, this Corvette is pretty well loaded with the 3LT trimline and the Z51 package along with a black interior layout and black wheels.

I don’t quite understand the layout of the classifieds page, as it has the number 780,000 in bold which would lead you to believe that is the price. However, the first line in the ad includes “Pris exklusive moms: 624,000 kr” and that translates to 624,000 Swedish Krona, Price before Value Added Tax. Perhaps 780,000kr is the price after applicable taxes, in which case this car costs around $120,103 in US dollars while 624,000kr would be $96,082 in US funds. In either case, this Corvette is very expensive considering the price of the new Corvette here in the US, but for a Swedish buyer who wants to drive a unique American sports car – this car is already imported, modified and ready to drive.

While it wouldn’t be a financially sound decision for an American Corvette lover to buy this car and have it shipped back to the US, this Swedish Stingray shows how cool the new Corvette looks when it is dressed up as a cop car. This could lead some American Corvette Stingray owners to go a similar direction in designing an eye catching show car while also showing police departments what a sharp looking show vehicle the Corvette can serve as for programs like DARE, etc.

Click here to check out the 2014 Chevrolet Corvette Stingray police car on the Swedish classifieds site, including more pictures.

Thanks to Belgian Max for the heads up on this!