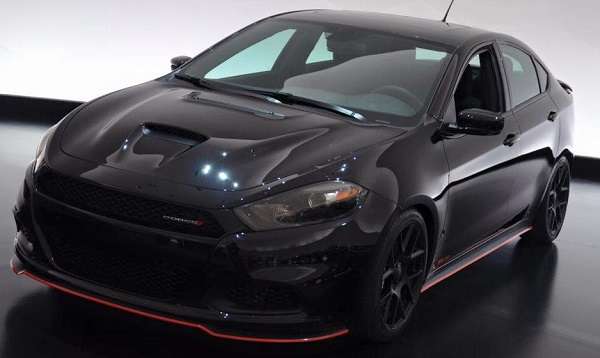 Reasons to Embrade The Dodge Dart GLH at SEMA

The information on the Dodge Dart GLH Concept has come out of the SEMA Show in Las Vegas and due to the standard 2.0L base engine, some enthusiasts who had high hopes for an SRT-level Dart are hating on the sporty compact sedan – but we should all look at what this car could lead to rather than what it is right now.
Advertisement

Since the modern Dodge Dart was introduced, the sport compact world has been calling for a high performance variant. At first, it was rumored that there would be a Dart SRT that would pack big turbo power and an advanced all-wheel drive system that would allow it to rival the best from Ford and Subaru. Those rumors evolved from a Dart SRT to a Dart GLH when the company allegedly showed off a GLH badged Dart at the recent Chrysler dealer convention, so when the company rolled out the shadowy teaser images this weekend – many people believed that the 2015 SEMA Show would introduce the world to the Dart GLH.

The History of the Dodge GLH
The GLH name was first used back in the 1980s on the turbocharged Dodge Omni and back then, GLH stood for “Goes Like Hell”. Like the new Dart, the 80s Omni was a fuel-friendly compact with budget-friendly price tag while the Omni GLH packed big power, enhanced handling and a exterior design on the 5-door hatchback.

When you combine the goals of the old Omni GLH with the recent success of the Dodge Hellcat cars, Chrysler has the perfect marketing opportunity to roll out a modern Dart GLH, serving as a sort of little brother to the 707hp muscle cars. However, when the SEMA Show opened and the information on this sporty compact sedan was revealed, the news that this Dodge Dart GLH has the 2.0L base model engine has drawn a tremendous amount of criticism from around the automotive world

I understand why people are unhappy with the engine choice in the Dodge Dart GLH SEMA Concept, as the standard 2.0L 4-cylinder with 160 horsepower and 148lb-ft of torque would hardly allow this car to “go like hell”, but if you look beyond that odd engine choice – this concept could still lead to the high performance Dart GLH that so many people want to see

The Key Components of Dodge Dart GLH
So let’s forget for a minute that the Dodge Dart GLH has the base 2.0L engine; instead focusing on the other aspects of this show car concept.

On the outside, the Dart GLH Concept has a body kit that gives the compact sedan a much sportier stance all around, but the kit isn’t all that outrageous. I should point out that the Omni GLH and the Dodge Neon SRT4 both had mild appearance upgrades that improved the look and the aerodynamic properties. There is also a concept active air intake hood system that would help feed a much hungrier engine than the standard 2.0L.

To improve handling (aside from the advantages of the improved aerodynamics), Mopar added a big brake package, a sport suspension setup and lightweight wheels wrapped in high performance rubber. The Omni GLH and Neon SRT4 both had upgraded braking bits, a sportier suspension setup and a package-specific wheel/tire package.

Finally, the Dodge Dart GLH Concept has a catback exhaust system that should add power and tone – just like the Omni GLH and the Neon SRT4 had a high performance exhaust system which gave them both a distinctly loud grumble.

In short, the Dart GLH Concept has all of the similar component upgrades to the Omni GLH and the Neon SRT4, leaving the engine selection as the only aspect of this SEMA show car that isn’t like the older GLH and SRT4 production models. This car has everything that we all wanted in a high performance Dart except for the big power and because all of the other aspects were addressed when building this Dart concept, I strongly believe that this car could lead to the Dart GLH/SRT that will make everyone happy.

Where is the Big Engine?
There has long been a rumor that Chrysler is working on a turbocharged version of the 2.0L mill and it is widely expect that this small turbocharged engine will be the powerplant of a high performance Dodge Dart. Insiders suggest that this engine isn’t ready for prime time just yet, but even if it was ready, the company wouldn’t pick a show like SEMA to roll out such an important product. A vehicle debut like the Dart GLH would most certainly be reserved for a major auto show such as Detroit, New York or LA, but the SEMA Show serves as the perfect place to show off a high performance concept.

The Dodge Dart GLH Concept – while unfortunately low-powered – has almost all of the components needed to create the next generation of the Mopar high performance compact. Now that we have seen this car with so many features that would make sense for a production Dart GLH/SRT, the company is only an engine upgrade away from having a compact that would continue the plans laid by the Omni GLH and the Neon SRT4

When looking at the SEMA Dart GLH Concept, don’t focus on the engine bay but rather, look at the similarities between this car and the old Omni GLH or Neon SRT4. When ignoring the engine, this GLH Concept is exactly what we all want and while this car falls just short of our expectations for now, I fully believe that we will see this car again in the future with the big power that it needs.

We just don’t know when that big power Dodge Dart GLH will debut, but the rest of this concept car displays that Chrysler is on the right track in creating a Dart that will do proper justice to the GLH name. In the meantime, Chrysler is keeping us all on the edge of our seats, but be patient my Mopar-loving friends, as bigger power could be right around the corner.

Damian Valdez wrote on November 4, 2015 - 1:31am Permalink
You cannot possibly compare this GLH Dart to the SRT 4 neon! And even though hypothetically speaking here, if they do come out with a srt4 Dart, it's basically going to look just like a GLH with the engine upgrade which is lame in my opinion! This really sucks! And has me all worked up! I was really hoping and wishing for an SRT 4 dart...
MOPARVICK wrote on November 4, 2015 - 6:26pm Permalink
I 100% agree. At the same time, I have to call BS that this is going to be a high powered car. Furthermore, with all of the issues on the current Dart.... FCA will have to step up and take care of their customers, or they will go out of business.
minibud wrote on November 13, 2015 - 3:07pm Permalink
Yes, you can compare it. It's more of a historic lineage than the "SRT" badge. GLH was the original turbo-four, and the Omni GLHS was tied with the Mustang Cobra of the same year as fastest American production car. But the real point here, is that there will still be an SRT Dart. The top-shelf, super-big-power version will be the SRT. One rung down the ladder will be the GLH in the 300hp range. FCA informed dealers that all darts will eventually have the same 2.0 turbo setup, but with different outputs. The standard dart still having 240hp, with only the GLH and SRT models having optional AWD.
Eric wrote on November 4, 2015 - 11:41am Permalink
I do not know where torque got their information from about this replacing the SRT plan but that is not true. This is not a replacement, just another option. ;)