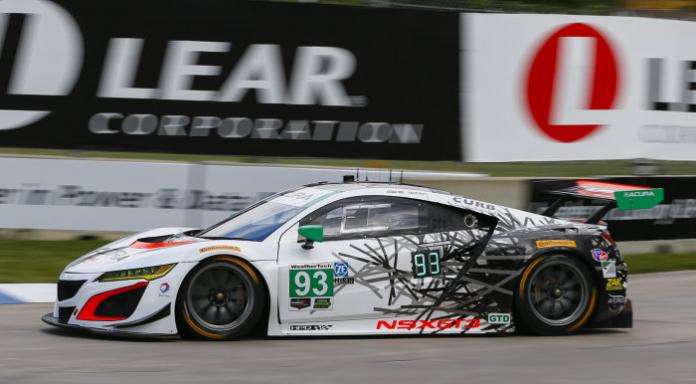 This past weekend, the new Acura NSX racing program claimed its first win in the WeatherTech SportsCar Championship and I was there to witness the historic win right along with the folks from Acura.
Advertisement

The 2017 Detroit Grand Prix was held this past weekend on Detroit’s Belle Isle race course and Saturday marked the first time which I have attended the race. I was fortunate enough to be invited by Acura to watch the racing action from the Honda Racing Chalet along the front straightaway and, as we reported on Sunday, the Acura NSX got its first series win.

I am a big fan of the WeatherTech SportsCar Championship series, particularly the GT LeMans and GT Daytona class in which the new Acura NSX teams compete, so while I enjoyed the morning’s TransAm race and the incredibly exciting super trucks, my main event was the Chevrolet SportsCar Classic. Joining the 15 cars in the GT Daytona field were the 10 Prototype and 3 Prototype Challenge cars, with a total of 28 cars in the 3-class field – and we were seated right at the finish line to watch the action.

The Early Going
Early in the race, the #93 Acura NSX driven by Katherine Legge was up around the front of the field while the #86 NSX driven by Oswaldo "Ozz" Negri worked its way up from the rear of the field. During the first 30 minutes of the 100-minute race, the #93 car was running in the top 3 or 4 as the #86 car made its way through the lower positions. However, the Audi R8 of Stevenson had pulled out to a big lead, so sitting at the finish line, the first half hour of racing would have the #57 Audi blast across the line, followed by the rest of the GTD field a few seconds later.

That all changed around the 30-minute mark, when a full course caution sent the entire GTD field onto pit road. During this pit stop, a driver change was made and, for many teams, a new set of tires was added as well. Michael Shank, the owner of the both Acura NSX GT3 cars, made the decision to only change two tires on the #93 car while the #86 car only took on gas and a new driver. This decision put the #93 NSX in the lead in the GTD class while moving the #86 car up into the top 5 with just over an hour to go.

The Long Haul
During the course of the next 30 or so minutes, we watched from the start/finish line as driver Andy Llly and the #93 Acura worked to keep the #63 Ferrari in the review view mirror. For much of the time, the two cars would come out of the last turn and head into the long front straight close enough to make contact, while the rest of the technical road course had the two playing cat-and-mouse the whole way around the track.

Then, with about a half hour or so left in the race, the #93 Acura began to inch away. At first, it was just a situation where the NSX had gotten far enough ahead where the Ferrari was just tucked into the draft, but as time went on, that gap got bigger and bigger. As the end of the race neared, the Ferrari was no longer within striking distance, so Lally just had to keep making clean laps to take the win, with a lead of more than 2-seconds.

There were some dramatic moments when other vehicles ran into mechanical issues on the track and were forced to slowly coast back to pit road. Had any of those vehicles died on the track, there would have been a full course caution, which would have erased the #93 car’s huge lead, but in each case, the slowed vehicle was able to limp off of the track to safety. That allowed Michael Shank Racing to record their first win with the new Acura NSX GT3 racer while also getting the first win for this generation of the Acura NSX race car.

Meanwhile, the #86 NSX driven by Jeff Segal had moved up into the third spot, so the new NSX GT3 racing program was looking at its first win and its first ever two-podium day. Unfortunately, with two laps left, contact between the #86 NSX and the #48 Lamborghini sent the Acura wide and the Huracan was able to sneak by, along with the #96 BMW M6, forcing the #86 team to settle for a 5th place finish.

Even with “only” one car on the podium, it was an exciting day for the new Acura NSX race program and it made it that much more exciting to watch with the folks from Honda Racing right at the start/finish line. Not only did the team win, but they did so convincingly over a full field of competitors and if not for the late-race incident with the #48 Lambo, Acura most certainly could have taken two of the three podium positions. Based on this weekend’s performance, the Michael Shank Acura NSX GT3 teams could continue to lead the GTD field as they continue on with the 2017 season.