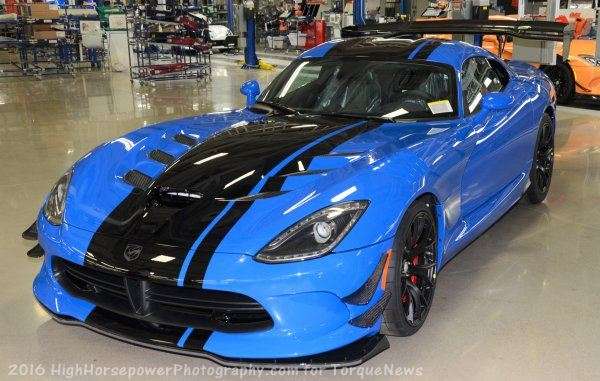 We should be closer than ever to seeing a new Nürburgring Nordschleife track record for the Dodge Viper ACR as when the track opens for the 2016 season, the speed limits set last season following a fatal accident last year will be no more.
Advertisement

Back on March 28th, 2015, a Nissan GTR race car driven by Jann Mardenborough in the VLN Endurance race caught air and left the track – ending up in a spectator area, killing one person and hurting several others. Immediately following that, the track officials imposed a speed limit on that area of the track of 124 miles per hour, along with a 155mph speed limit in two other areas of the 12.6 mile course where there was a concern for spectator and driver safety.

Those speed limits effectively ended the efforts of companies building high performance cars to set production records at the Nürburgring and as a result, some major road course monsters have yet to set official Nürburgring Nordschleife lap times. Most notably, the new Chevrolet Corvette Z06, the new Ford Shelby GT350 Mustang and the newest Dodge Viper ACR have yet to post an official lap time on the legendary track.

Ford Motor Company has never really shown any interest in setting scorching Nürburgring records, but that might change with their new GT350R Mustang. On the other hand, the Corvette Z06 and the Dodge Viper ACR have both taken their turns as the quickest American production cars to lap “the ‘Ring”, so it has long been expected that both Chevy and Dodge will eventually announced lap times for their hottest supercars.

Now that the Nürburgring is set to open for 2016 without those speed limits, we are likely to see more footage of the Viper and Corvette in action and with at least one key revision to the track surface – we could see even quickly times than in the past.

The Viper ACR’s Place in History
The 2010 Dodge Viper SRT10 American Club Racer was, for a very long time, the fastest full production road car to make a lap of the Nürburgring Nordschleife while also holding records at other tracks all over North America. After the Viper went out of production in 2010, the Corvette Z06, Corvette ZR1 and a handful of other cars broke the Viper’s record at the Ring and some other tracks, but since the 2016 Dodge Viper ACR has been introduced – the newest Mopar supercar has been reclaiming track records around the country.

The new Viper ACR has proven to be even quicker than the previous generation Viper ACR on some other tracks, so there is a chance that it could be quicker than the old version at the Nürburgring. Really, the new Viper ACR should most certainly be able to beat the previous ACR’s Ring time of 7:12.13, but to claim the record of the fastest production road car, it will have to beat the Porsche 918 Hybrid’s time of 6:57.

Is the new Viper ACR 15 seconds better than the 2010 Viper ACR? That seems hard to believe, but based on the records set at other tracks in the US – there is a chance that the Viper team could make a real run at the hybrid Porsche supercar.

One key aspect that could play a part in quicker Nürburgring Nordschleife lap times is the revised portion of the track where the spectator was killed last year. This area is named the Flugplatz, which translates to “airport” in German. It is called this because there was a slight hump in the track that would get many cars a little airborne. In the case of the Nissan GTR just over a year ago, he got more than a little airborne with horrific consequences. In addition to beefing up the fencing and removing the spectator area at the end of the Flugplatz, the track officials altered the track surface so that cars will not get airborne. If they have made the track smoother in that area, drivers may be able to get through this section even faster than before – possibly leading to new records for production cars.

Only time will tell, but with no mention of official record times from the Dodge Viper ACR, the Chevrolet Corvette Z06 and the Ford Shelby GT350R Mustang and the removal of the speed limits on the world’s most famous road course – we should be seeing some record runs soon.