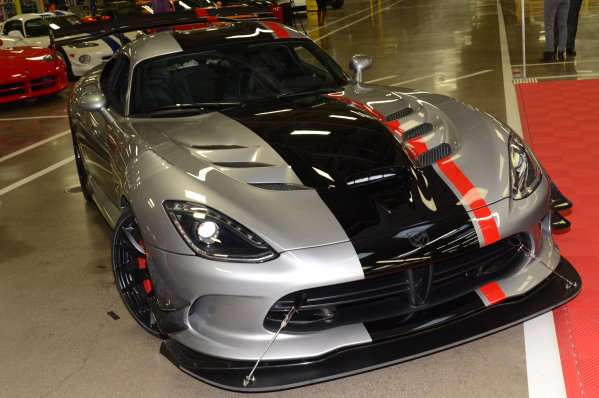 According to the folks at Dodge and the SCCA, the new Dodge Viper ACR has proven itself to be the most capable street legal track car in the world by setting new lap records at 13 different tracks around the United States – defeating cars that cost ten times as much at well-known road courses like Virginia International Raceway, Road Atlanta and Laguna Seca.
Advertisement

The “old” 2010 Dodge Viper SRT10 ACR proved that it was the most track-capable production street car in the world back in 2011 when endurance racer Dominik Farnbacher set the track record on the famed Nürburgring Nordschleife in Germany, but over the past 4 years, a great many new cars have hit the track and beaten the old Viper’s times. In fact, the Viper team has spent the last few years watching their lap records fall at various tracks around the country, but the company has spent the past few months visiting some of those tracks with the 2016 Viper ACR to reclaim records – and they did so in a very big way.

The 2016 Dodge Viper ACR is powered by the same 8.4L V10 as the non-ACR Viper and it has the same 6-speed transmission, but that is where the major similarities end. The Viper ACR has a unique, adjustable Bilstein dampers and the stiffest springs ever offered on the Viper, both of which work with the specially tuned electronic stability control. The new ACR has lightweight wheels wrapped in Kumho tires that were designed specifically for the new ACR and behind those wheels is the most advanced braking package ever installed on any factory Dodge product. This system features Brembo Carbon Ceramic Matrix rotors measuring 15.4” in the front and 14.2” in the rear with 6-piston calipers up front and 4-piston units out back.

The new Viper ACR also has unique aerodynamic bits that help increase downforce, but the biggest news on that front is the Extreme Aero package, which a gigantic adjustable rear spoiler with dual planes, a lower rear diffuser that extends up to the middle of the undercarriage, a prominent adjustable front splitter, two carbon fiber dive planes on each side of the front end and a set of vents above the front wheels to more air out of the wheel wells. As a result, the Viper ACR creates 2,000lbs of downforce at 177 miles per hour.

When you put together all of these components, you have what is literally the greatest Dodge track car of all time and to prove that, the company took the car to tracks all over the US to see if it could set new lap records. In doing so, they set 13 track records – often beating far more expensive cars – and with these records comes the ability to claim the new Viper ACR is the most track-capable street car in the world.

After those 12 track records were set, the Viper team headed to Laguna Seca with the 2016 ACR, but rather than having Winkler handle the driving – the tapped local expert Randy Pobst. Pobst is an expert at Laguna Seca and he is responsible for many of the fastest laps around the famed road course. In fact, Pobst set the previous track record with the $845k Porsche 918 hybrid supercar and I say previous, because Pobst and the new Viper absolutely dismantled the Porsche’s record.

When Pobst hit Laguna Seca with the Porsche 918, no road car had turned in an official lap time under 1:30. Pobst broke that barrier with the 918, setting a lap record of 1:29.89. On that same track while driving the $122k Dodge Viper ACR, Pobst laid down an incredible 1:28.65 – more than a second faster than the high priced, AWD Porsche supercar. The previous Viper ACR had a best time at Laguna Seca of 1:33.92.

The reason that I mention the 2010 Viper ACR time at Laguna Seca, is that the Porsche 918 which was defeated by the 2016 Viper ACR holds the current Nürburgring track record of 6:57. If the 2016 Viper ACR is able to beat the Porsche at Laguna Seca, there is a good chance that it will also be able to best the 918’s time at the famed German road course. Now, Dodge just needs the German track to lift the speed limits – at which point we can expect to see the Viper ACR making a run at being the first American car to get into the 6 minute range.

Regardless of the Nürburgring results, the Dodge Viper ACR has once again proven itself to be the class of the road-going track car world. All Hail the King!

In the meantime, check out the video below of the 2016 Viper ACR setting the record at Laguna Seca.