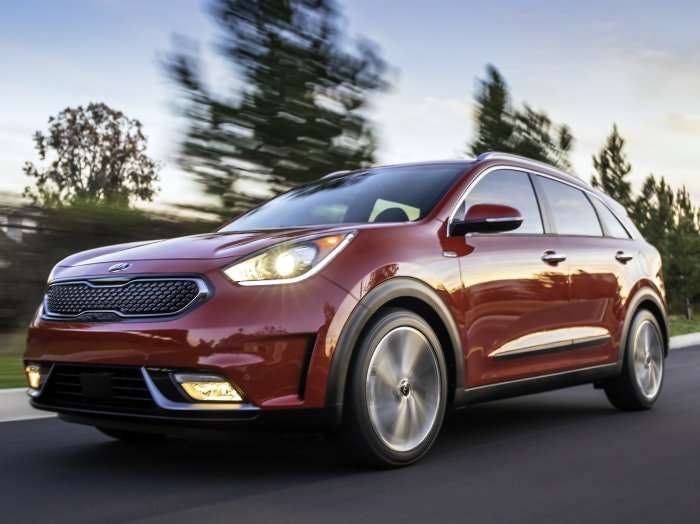 I recently had a chance to spend a week behind the wheel of a 2017 Kia Niro Touring and I came away from the experience impressed with the driving dynamics and the loaded cabin of the roomy hybrid hatchback.
Advertisement

The closest competitor to the Kia Niro is the Toyota Prius, but the Korean hybrid feels more like a small SUV than a compact hatchback. At the same time, the fact that the Niro is not offered with all-wheel-drive and it has a relatively low stance prevents it from fitting into the small crossover segment, so it is kind of in a class of its own.

Segment classification aside, the Kia Niro is a great hybrid hatchback with a premium interior – perfect for someone who wants a vehicle that has more interior space than the Prius with the predictably-impressive hybrid driving advantages, including all-electric driving.

Those two features – the loaded interior and the unique driving dynamics combine to make the Kia Niro Touring a great option for someone who wants a hybrid that stands out in that segment. Below, I break down the interior and driving dynamics, after a quick bit on pricing.

Pricing
My Kia Niro Touring test vehicle had a base price of $29,650. When you add in the Pearl White paint ($395), the Advanced Technology Package ($1,900) and the destination charge ($895), the price as tested comes to $32,840. If you want a stripped down model, you can get into a base Niro FE for under $25,000, but considering the list of features, my Touring test vehicle was most certainly worth the extra cost.

Note: The weather was gross for the week that I had the Niro, so my white car wasn’t picture-ready, so while the interior pictures below show the actual test car, these red images are stock Kia media images – not the actual vehicle that I drove.

Premium Interior Features
Many hybrids focus on keeping the price low and the fuel economy high, which often leads to a relatively bare-bones vehicle. Hybrids are getting more luxurious, but as is the case with most of the segments in which they compete, Kia is ahead of the game when it comes to adding luxury features to non-luxury models.

The front and rear seats are wrapped in leather, with the front seats offering heated and cooled surfaces and power controls on the driver’s side. The leather-wrapped steering wheel is heated and clad with controls for the infotainment system, the hands-free phone system and the driver information center. The Niro comes with the Kia smart key system, which allows the car to unlock and the interior lights to illuminate as you approach and push-button start is standard, so you hardly ever have to take your key out of your pocket. The Kia Niro Touring comes with a standard 8-inch infotainment screen mounted high on the dash, offering access to all of the vehicles interior controls on one tidy panel. There is a collection of buttons and knobs for the sound system and a second traditional panel for the dual-zone climate control, so if you don’t love the touch screen, you don’t have to use it. You can adjust just about everything with the knobs and buttons on the center stack, with the controls on the steering wheel or with voice controls, in addition to the touchscreen.

That big touchscreen system feeds the sound through a Harman Kardon speaker system that provides great sound quality, and in addition to AM, FM, satellite, Apple CarPlay and Android Auto, the Niro’s entertainment system offers a USB connection, so there are many ways to enjoy your favorite tunes in the Kia hybrid. In addition to all sorts of premium features, the Kia Niro Touring offers an impressive amount of interior space. There is tons of room in every dimension for the driver, the front passengers and both outboard rear passengers. With a very tall driver and front passenger, leg room gets a bit tight in the rear row, but with the front seats adjusted to comfortably hold two six-foot-tall adults, the back seat will seat two more adults just as comfortably. More importantly, even with the front seats moved all of the way back, there is still plenty of leg room for kids, so while this can be a solid daily carpool vehicle for yourself and a few coworkers, it serves perfectly as a family hauler. That is especially true when you consider the roomy rear cargo area, complete with an in-floor organizing system that keeps groceries stationary on the trip home. For a vehicle of the Niro’s size, the interior space is impressive and the list of standard features leaves little to want. Really, there are few features that you could ask for in this hybrid Kia, coming with everything that you would get in a high-priced luxury vehicle in a small, affordable hybrid hatchback.

Crossover Feel, Hybrid Fuel Economy
The Kia Niro is powered by a 1.6-liter gasoline engine mated to a 43-horsepower electric assist motor, leading a total system output of 146 horsepower and 195 lb-ft of torque. In the svelte Korean hatchback, that drivetrain doesn’t make it lightning-quick, but it provides as much power as the average hybrid owner will need in most driving situations.

If you mash the throttle from a stop, the Niro is surprisingly quick thanks to the instant torque delivery of the electric motor. Once you are moving, acceleration continues to be smooth, allowing the car to climb to any posted highway speed with proper urgency. Again, I wouldn’t call it quick in general, but it is as quick as it need to be, making this a great car for all sorts of average driving situations. This isn’t something that anyone is going to take racing, but while driving the roomy hybrid hatchback, I never thought that it felt underpowered for a vehicle of this size. Best of all, it has a dual clutch automatic transmission – not a CVT – so the transmission offers the shifting feel that many drivers expect. When you are launching hard from a stop, the Niro is employing both the electric motor and the gasoline engine, but under normal driving conditions, the electric motor does much of the work. When sitting in slow-moving highway traffic, the gasoline engine only fires from time to time, especially when I spent some time driving at higher speeds – thus charging up the batteries a bit. Coupled with the regenerative braking system, the Niro offers an impressive amount of all-electric driving for a vehicle that you don’t plug in.

In addition to stop-and-go traffic, the Niro spends a great deal of time in all-electric mode when driving in residential areas, so many of my daily tasks were performed with the hybrid Kia running purely on electric power. The engine fires up when battery levels get too low, when vehicle speed gets too high or when the throttle input is too high, so with gentle driving, the Niro spends a ton of time operating without burning and gasoline. When it transitions from all-electric to gasoline power, it is seamless, with the engine noise being the only indication, but the engine is quiet enough that occupants won’t notice the engine starting and stopping when cruising around town. The Kia Niro with the smaller wheel and tire package offers better fuel economy, but my Touring trim level test vehicle came with 18-inch wheels and some weight-adding goodies that effectively lower the EPA ratings to 46mpg in the city, 40mpg on the highway and 43mpg combined. I found that with some gentle driving, I could get slightly better than 40mpg on the highway and around town, I could get closer to 50mpg. As a result, I averaged 44.8mpg over the course of a week, slightly better than the EPA expectations, but anyone who spends lots of time in slow-moving traffic will likely get even better numbers. Basically, the less time you spend driving at 60+ on the highway, the better your fuel economy numbers will be with the Kia Niro.

In terms of handling and ride quality, this is where the Niro differentiates itself from the other super-efficient hybrid compacts. The Kia has a higher seating position and a higher ride height so it feels less like a sedan than many hybrids, while still sitting lower than most small crossovers. It offers a smooth ride, even with the 18-inch wheel option, while handling curves better than the average small crossover or SUV thanks to the lowered stance. In the end, the Kia Niro doesn’t get the same 50+ fuel economy as some comparable hybrid models, but it offers a more comfortable ride and the feel of a crossover while still getting near the 50mpg mark around town. The Kia brand as a whole has come a long way in terms of handling and ride quality, and the Niro is a great example of those efforts, while also introducing the advantages of the hybrid electric drive.

Cromer wrote on August 16, 2018 - 4:16am Permalink
Kia always prides with the nice interior designs of their cars which adds up to the experience of driving. Keep it up Kia.