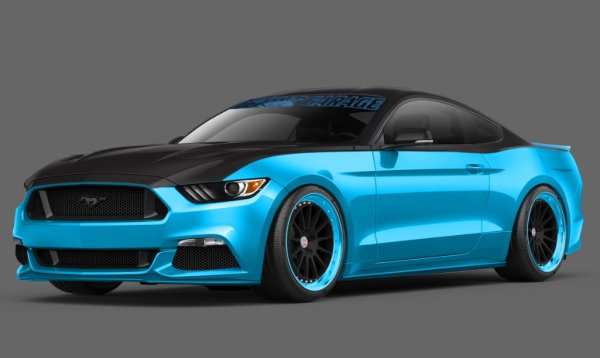 Ford Motor Company announced their plans for the 2015 Ford Mustang at this year’s SEMA Show today with promises of more than a dozen examples on the show floor and with this announcement comes artwork and some brief information on two of those next gen Mustangs.
Advertisement

First thing first – Ford will bring out “over a dozen” examples of the 2015 Ford Mustang at the 2014 SEMA Show next month in Las Vegas. As has been the case for a very long time, Ford has teamed up with a collection of performance component companies and tuning shops to customize the mighty Mustang and with at least a dozen expected, the new pony car will likely be the centerpiece of the massive Ford Motor Company display at SEMA.

Details on the entire fleet of customized 2015 Ford Mustang coupes and convertibles at the 2014 SEMA Show are limited, but the company has stated that the spotlight will be on those models equipped with the new 2.3L EcoBoost engine. They have also stated that we can expect to see plenty of the tried and true 5.0L V8-powered Mustang GT and I would be surprised if there wasn’t at least one new Mustang packing the base model V6.

Unfortunately, while Ford intends to bring out at least 12 customized examples of the 2015 Mustang to SEMA, they have only offered up information on two of them…and that information is pretty limited. However, information on two Mustangs is better than information on none of them so these two SEMA-bound pony car should wet your whistle for the upcoming convention in November.

Petty Garage 2015 Mustang GT
The first 2015 Ford Mustang teased today is the gorgeous bright blue and black pony car shown above. This Mustang has been modified by the Petty Garage and its most striking feature is the familiar bright blue paint that has adorned Richard Petty’s racecars for decades. There are few specifics on this car, but we do know that the 5.0L V8 with be topped with a Roush supercharger that should get the power right up into the 600hp range. Also, in addition to the unique two tone paint scheme, this custom next gen Mustang wears a set of aftermarket wheels painted to match the body and based on how well the wheels are tucked up to the fenders, I would guess that this car also has some sort of suspension upgrades. Of course, it wouldn’t be a SEMA car if it didn’t have a flashy interior; which I expect will be black with blue trim.

While this 2015 Ford Mustang GT will debut at SEMA, its biggest stage will be the Barrett Jackson Auto Auction, where it will be sold to the highest bidder and the proceeds will go to support the Victory Junction children’s charity.

Galpin Auto Sports 2015 Mustang GT
The second 2015 Ford Mustang teased today is another 5.0L GT model that has been modified by the folks at Galpin Auto Sports to celebrate the Mustang’s 50th birthday. The 50th is often referred to as the golden anniversary and with that in mind, GAS has designed a Mustang show car that features a black body with gold flecking, gold wheels, gold brake calipers, gold badges and gold interior trim. The image doesn’t provide much insight, but the announcement indicates that the GAS Mustang will have a restyled front and rear fascia and a gold powder coated supercharger from Whipple that will help this muscle car make 725 horsepower. Based on the image shown here and what we know of most SEMA cars, this 2015 Mustang will feature a big aftermarket brake package, a performance suspension setup and an exhaust system that allows the blown V8 to roar under heavy throttle.

The 201 SEMA Show starts in early November so we will get to see them all in a few weeks, but with any luck, the folks at Ford will offer up some more artwork before then.

In case you missed it, we recently looked at the Vortech supercharged 2015 Mustang that is headed to SEMA and you can check that out by clicking here.