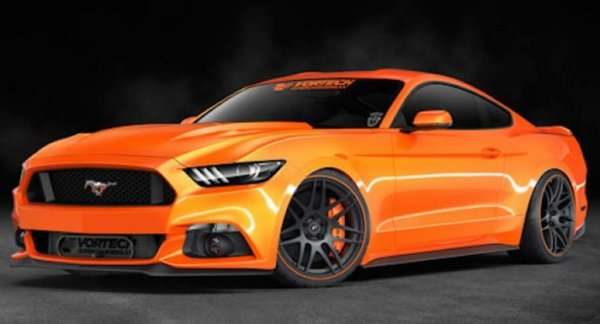 The folks at Vortech Superchargers have offered up the first look at their 2015 Ford Mustang GT that will be introduced in the flesh at the upcoming SEMA Show, but far more important is the bit of information that comes with the Vortech-blown pony car – the forced induction specialists expect that it could make more than 1,200 horsepower with the right modifications.
Advertisement

Vortech Superchargers are found hooked up to some of the most powerful engines in the world and with many of those Vortech-blown performance vehicles being Mustangs, it should come as no surprise that the supercharger experts will use a 2015 Ford Mustang GT to show off their wares at the 2014 SEMA Show.

The Vortech SEMA 2015 Mustang GT
The artwork above shows the Vortech Superchargers 2015 Mustang GT in all of its orange and black glory. It appears as though the body work of this tuned pony car is all standard to the 2015 Mustang GT, but this Mustang wears a huge set of Forgiato matte black wheels that complement the matte black lower body work while the orange trim on the wheels match the eye-catching body color. Also, this Mustang definitely has some suspension work, based on the way that the bright orange body tucks down around the matte black wheels and that massive break caliper behind the front wheel appears to be an aftermarket Baer setup so while the body of the 2015 Mustang hasn’t been changed much for the Vortech SEMA show car, the go-fast components have been upgraded to work with the added power.

Even without major body modifications, I’m still in love with the look of this big power 2015 Mustang GT.

This increase is achieved with only 7.5 to 8.5 pounds of boost from the self-lubricating Vortech blower system, but Vortech will also show off another 2015 Mustang GT system that will make 775 horsepower with an 8 rib blower assembly, a fuel system upgrade and a competition air inlet assembly.

While simply adding a supercharger package to the 2015 Ford Mustang GT could get the power levels up into the 1,000-1,200 horsepower mark, I would imagine that to make a thousand horsepower with any level of reliability, I would expect to see more significant modifications including exhaust headers, major fuel system upgrades and maybe some tougher internals but who knows – maybe the stock rotating assembly (crankshaft, rods, pistons, etc) are tough enough to handle the boost needed to top 1,000hp.

We should know more once all of this information drops in November at the SEMA Show.

Toyota vs Tesla: Which Stock To Buy These Days
For Some Former Daimler Managers Daimler Is Authority, While Tesla Is Like a Startup
END_OF_DOCUMENT_TOKEN_TO_BE_REPLACED