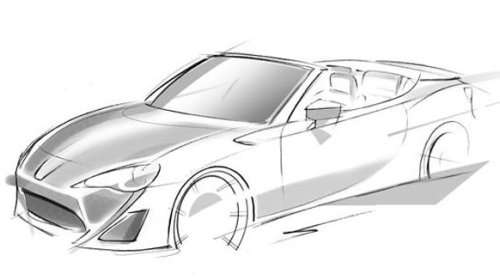 Toyota Motor Corp has announced that the Toyota GT86 Open Concept will debut at the upcoming 2013 Geneva Motor Show and when it does – the world will have its first look at will likely become the Scion FR-S Convertible and possibly the Subaru BRZ Convertible.
Advertisement

When the 2013 Toyota GT86 Open Concept debuts next month at the 2013 Geneva Motor Show, it will be the first time that one of the Toyobaru coupes is officially displayed by either of the involved automakers. We have seen the Scion FR-S with the top cut off including a show car built in cooperation with Cartel Customs along with a unique FR-S displayed at SEMA in 2012 with a unique open aired roofline also done by Cartel. The problem with those two vehicles is that the Cartel Customs Scion FR-S Convertible wasn’t designed for production and it did not have a rear seat. The FR-S displayed at SEMA this past year done by Cartel Customs didn’t have a back seat or any center section of the roof - clearly making it a far cry from a production ready vehicle.

However, based on the sole image of the Toyota GT86 Open Concept shown on the right, it looks as though Toyota plans for the GT86, FR-S and BRZ to maintain their 2+2 seating design. Should that be the case, the Scion FR-S Convertible will have a major advantage over other small sports minded convertibles in the US market. While slightly larger performance models like the Chevrolet Camaro Convertible and the Ford Mustang Convertible offering seating for four, smaller vehicles that would compete more closely with the FR-S, such as the Nissan 370Z and the Mazda MX5 both do not have back seats. Not only does that mean more seating capacity but the addition of the rear seat also allows more space for stowing items. Having logged some miles on a Miata in my days, the interior didn’t offer much storage space and when I had someone in the passenger seat; my small camera case had to go in the trunk. Even a small back seat that offers cramped space for passengers makes a big difference in terms of being able to carry simple items inside of the vehicle.

Absolutely no information was offered on the Toyota GT86 Open Concept headed to Geneva next month but I would expect that the drivetrain of this convertible concept will be nearly identical to the 200hp setup found in the standard production Toyota, Scion and Subaru coupes. The automaker has stated that the GT86 convertible concept will preview “a possible future development of the award winning GT86 sports coupe”. Toyota has also stated that they will use this car in Geneva to gauge public reaction but considering the amount of the interest around a Toyobaru convertible – I would expect that this concept will realistically give us our first look at the future Toyota GT86 Convertible. Should the drawing above be any indication, the GT86 Open Concept won’t have any outrageous design cues that couldn’t make it through to production and with any luck, the company will also hit us with some drivetrain specs in Geneva.

Since the day that the first Toyota GT86 was introduced to the world, the enthusiast community around the world has been clamoring for a convertible version of the Toyota sports coupe along with the Scion FR-S and the Subaru BRZ. The shape of the Toyobaru rear wheel drive sports cars is very handsome in coupe form but these three just look like cars that would look great with the top cut off. The challenge for Toyota and Subaru will be to develop a topless version of the Toyota GT86, the Scion FR-S and the Subaru BRZ that doesn’t greatly increase weight of the car. One of the reasons that these sports coupes are able to perform so well with “only 200hp” is their uber low curb weight. However, convertible versions of coupes generally weight more due to the inclusion of the metal frame, gearings and electronics of the convertible top along with the chassis upgrades needed when the roofline has been removed. The Scion FR-S performs beautifully with 200 horsepower but if you were to add a few hundred pounds, these sports cars might be a little light on power.

The 2013 Geneva Motor Show begins in early March and along with all of your top automotive news, you can expect Geneva coverage here on TorqueNews.com.

John Goreham wrote on February 1, 2013 - 4:45pm Permalink
Awesome! If Toyabaru can build the heavier drop top with about 250 hp, a rev-matching stick shift, and keep it under $35K they will have quite a car. I've driven the current FR-S and it seems Freakin Really - Slow to me. Without more power this heavier car will be a real slowpoke. I'm a fan of the Toyota brand and I have my fingers crossed. BTW, you are right. Rear seats in a convertible are very handy. They also keep insurance costs down.