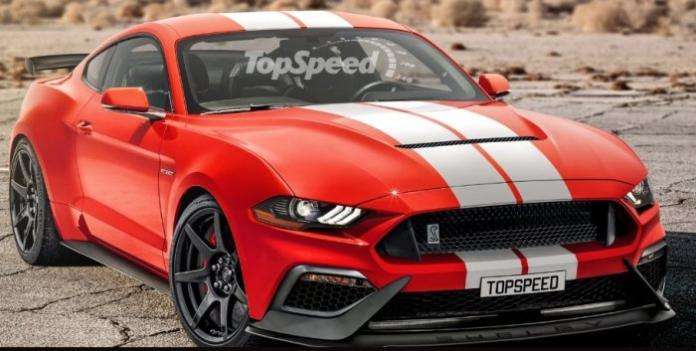 We have only seen what is expected to be the 2019 Ford Shelby GT500 Mustang under black-and-white camouflage, but based on spy shots and inside information, the artists from TopSpeed have created what they believe is a Mustang which should resemble the actual next gen GT500.
Advertisement

Truth be told, we really don’t know anything about the 2019 Ford Shelby GT500 Mustang, but a steady flow of spy shots, insider information and a slip-up by the Ford Motor Company website folks have all but confirmed that there is something faster than the current Shelby GT350 coming from the Mustang stable.

It is unclear whether the 2019 Ford Shelby GT500 Mustang will be a high performance, straight line monster like the previous generation GT500 or if it will be more like the current GT350R – but with more power. Rumors suggest that the GT500 will have gobs more power than the GT350 or GT350R, but the key focus will still be road handling. Basically, more of a Camaro ZL1 1LE competitor than a Challenger SRT Hellcat.

In any case, should Ford roll out a new Shelby GT500 Mustang, it will likely look like a more extreme version of the current GT350R, and that is the approach that the team from TopSpeed took in designing what they expect to be the next high performance Ford Mustang.

Up front, the TopSpeed GT500 Mustang has the longer hood and angrier brow of the 2018 Mustang, with the basic upper grille design of the current GT350. The lower portion of the front fascia is similar to the current GT350R, but the center vent is bigger and the edge vents are huge – essentially making the entire lower front fascia a vent of some sort. Below that, of course, is a prominent chin spoiler that extends out further than the GT350R piece in every direction. Finally, the hood of the TopSpeed GT500 Mustang has a large vent and a bulging hood – presumably making room for some form of forced induction.

Along the sides, the TopSpeed rendering of the 2019 Ford Shelby GT500 Mustang has flared wheel openings to make room for wider wheels, which look similar to the carbon fiber GT350R wheels in their simple design. There are also more aggressive side skirts which fill the gap to the extended rear quarter panels.

The last feature that we can see on the TopSpeed GT500 is the rear wing, which is bigger than the basic GT350 wing but not as large as the GT350R wing. We cannot see it, but we can expect that the real GT500 will have big quad exhaust tips nestled neatly in an aggressive rear diffuser.

While this artwork is purely based on speculation, spy shots and insider information, it seems to be perfectly reasonable to believe that the 2019 Ford Shelby GT500 Mustang could look a great deal like this when it arrives sometime next year. Of course, that arrival date of something in 2018 is also speculation, but if there is a GT500 on the way, TopSpeed thinks that it could like this and we agree.

LG's New EV Battery Plant Is a Welcome News for Tesla
Tesla Giga Berlin's New Hurdle: It's Not Only the Gov't, but Now Tesla Itself
END_OF_DOCUMENT_TOKEN_TO_BE_REPLACED