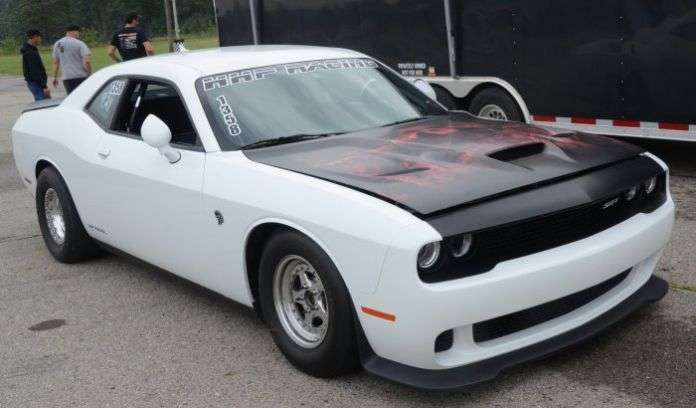 This past weekend, Josh Schwartz drove the HHP-built 2015 Dodge Challenger SRT Hellcat known as TopCat into the 8-second range for the first time – becoming the first automatic transmission Hellcat car in the 8s while once again becoming the quickest Hellcat Hemi-powered car in the world.
Advertisement

Throughout the modern Mopar community, the white Dodge Challenger SRT Hellcat shown above is known as TopCat. This Challenger was originally owned by John “TopCat” Toutkoushian until he passed away in 2016, at which point his wife, Linda, took ownership of the world’s quickest Hellcat car. John’s goal was to put this Hellcat Challenger in the 8s and after he passed, Linda and Josh Schwartz of High Horse Performance continued working towards that goal. During that time, the car has become known online at TopCat for good reason.

This past weekend, Josh, Linda and everyone else involved with the TopCat Challenger saw that goal achieved, as this Hellcat-powered coupe became the first 8-speed automatic transmission car in the world to break into the 8-second range. In addition to becoming the first A8 Hellcat car in the 8-second range, TopCat’s 8.883 set the new Hellcat quarter mile record – beating the previous record of 8.913 from the Epling Garage Challenger.

Details on the World’s Quickest Hellcat
Here is a quick rundown on the changes made to the TopCat Dodge Challenger SRT Hellcat to get this monster Mopar muscle car into the 8-second range.

The 8-speed automatic transmission in this Hellcat Challenger has been built by Southern Hot Rod and it is fitted with a ProTorque Torque Converter as well as a trans tune from Josh and AJ.

Finally, a set of HHP Santhuff Race shocks, HHP Ultralight 15” drag rims all the way around with Mickey Thompson 275 Street Radial Pro tires out back help get all of that power to the ground as smoothly as possible.

We do not currently have a video of the record run, but hopefully one will turn up. In the meantime, we know that the HHP-built Hellcat Challenger now owned by Linda Toutkoushian ran an 8.883 quarter mile at 154.99 miles per hour, making it the quickest Hellcat Hemi-powered car in the world. On that record run, TopCat pulled a 1.369 60-foot time with an 8th mile time of 5.72 and an 8th mile trap speed of 124.21 miles per hour.

Even if you aren’t really into drag racing, anyone who drives a fast car should be able to recognize how impressive it is for car on street tires to get from a stop to 125 miles per hour in less than 6 seconds.

So, congratulations to Josh, Linda, the HHP team and everyone else involved in getting Josh’s Dodge Challenger SRT Hellcat into the 8-second quarter mile range – setting a world record and achieving TopCat’s initial goal.

Pilgrim wrote on November 14, 2017 - 10:56am Permalink
Wow ! That Great Big Hemi does an 8.8 second qt mile. The little 302 or 5.0 Supercharged Cobra Mustang does 8.3 seconds all day long. With out Nitrous. Not Impressed
Derek curtis wrote on November 14, 2017 - 9:20pm Permalink
On DOT street approved 275's with stock rotating assembly, c'mon how is that not impressive. Especially given the weight of the car, just sayin, and I have owned 5.0 fox bodies they are awesome but your can't deny that this car is a badass machine...
Rick wrote on September 9, 2019 - 9:27pm Permalink
Let’s add 800lbs to your Mustang and see what’s up. Be respectful of the accomplishment.
willie wrote on November 14, 2017 - 5:19pm Permalink
With a car that weights the same as a heavy duty truck can run 8's that'd Amazon
hellcat harleydog 2 wrote on December 24, 2019 - 3:03pm Permalink
i have sat in this car about 2 yrs ago. it was awesome then but now look at the accomplishments proved . my own hellcat does hi to mid 9s but the extra .60 you have gained will be hard for anyone to match..