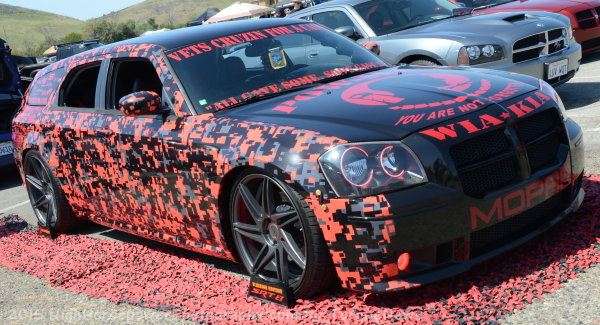 Today we bring you a look at some of the Dodge Magnum show cars in attendance at the recent 2015 Spring Festival after featuring the Dodge Challenger and Dodge Charger over the past two days – with the sporty wagon not being as common at the show, but Magnum owners made sure that their cars were as well represented as the others.
Advertisement

The LX Spring Festival is designed to feature privately owned modern Chrysler Group performance models, including the Dodge Charger, the Dodge Challenger, the Dodge Magnum, the Chrysler 300 and the Jeep Grand Cherokee. Of those models, the Magnum was the shortest lived, being sold for the 2005 -2008 model years. Unfortunately, shrinking interest in sport wagons in the US killed off the Magnum and that makes it one of the smaller groups at the LX Spring Festival, but the diversity in levels of customization is every bit as impressive as it is with the more plentiful models.

There were still far too many Dodge Magnum sport wagons on hand to show them all off, so I picked my top ten favorite and have put together a quick list below with pictures of my favorite wagons from the 2015 LX Spring Festival (in no specific order). I usually don’t focus on the back end of cars, but the rear angle view of this custom Dodge Magnum caught my eye with the unique blue strip on the rear pillar that extended down over the taillights and a set of diffusers along the bottom fascia. I wouldn’t call myself a huge fan of pink cars, nor am I a fan of cars with parts from multiple different vehicles, but this matte pink Magnum with the 2nd gen Charger front fascia was beautifully done from front to back. Don’t try to adjust your screen, this Dodge Magnum R/T really is THAT blue, with only the red pin striping on the side, the red calipers and the silver brake rotors being the only thing to break up the sea of light blue. This slammed Dodge Magnum SRT8 is minimally modified, but I love the look. This Dodge Magnum SRT8 may have had the best paint of the 2015 LX Spring Festival. That metallic red paint down the sides had incredible depth while the etched intake manifold was one of the most unique features of any car at the show. I cannot tell which trimline this Dodge Magnum was, but the unusual dark matte brown on the body, trim and wheels made for one sinister looking sport wagon. This bright metallic green Dodge Magnum SRT8 was another top paint competitor at the LX Spring Festival, with a supercharger, a slammed suspension setup and suicide doors allowing this wagon to stand out from the rest. This Dodge Magnum SRT8 has been customized for a cause, paying tribute to those American soldiers wounded or killed in action with a wicked cool exterior livery. Lowered, custom wheels, a unique front fascia, tons of black paint and a splash of lime green made this minimally built Magnum one of my favorites. This final Dodge Magnum SRT8 looked ready to rumble with a huge raised cowl hood and a sick stance over the custom wheels and tires.