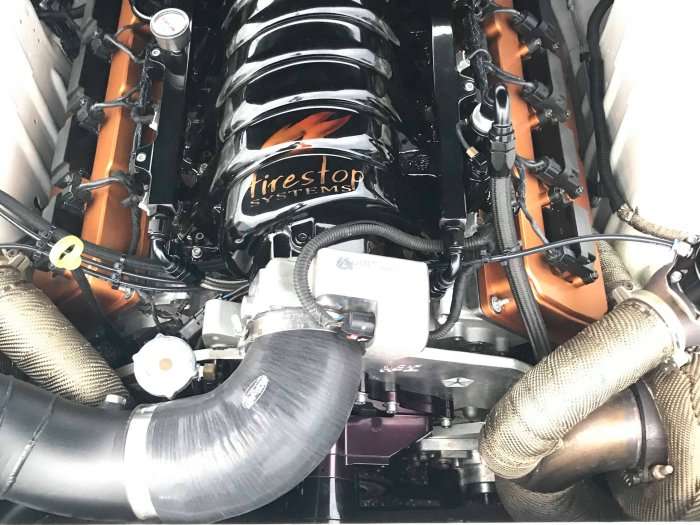 The street legal Dodge Challenger owned and driven by Todd Barber is the quickest example of the modern Mopar muscle car with and independent rear suspension setup, running in the 8.30s at the most recent Modern Street Hemi Shootout event – and we have video of the action.
Advertisement

We talk a great deal about track records set by the Dodge Challenger SRT Hellcat, but we have also featured a few examples of massively modified Mopar muscle cars from the era prior to the arrival of the Hellcat. The introduction of the Hellcat Challenger vastly increased the number of 10-second-or-quicker Dodge muscle cars on the street, but there are still plenty of insanely quick non-Hellcat Challengers.

One of those cars is the white Dodge Challenger R/T shown in the video below, owned and driven by Todd Barber. We first talked about Barber’s Challenger almost a year ago, when his street legal Dodge was running in the 8.60s, but this season, that twin turbo muscle car is even quicker – dipping into the 8.30s at the Modern Street Hemi Shootout event at Rockingham.

Barber’s Challenger
When this Challenger R/T rolled off of the assembly line, it was powered by a 5.7-liter Hemi with 375 horsepower. Today, this car is fitted with a 414-cubic inch Hemi from Modern Muscle, topped with a set of ThiTek cylinder heads and a twin turbo setup from GearHead Fabrications featuring a pair of 67-millimeter snails. The engine is tuned by Brian McMahan from Drag On Resources, with that power being sent to the rear wheels by means of an ATI T400 transmission and a Driveshaft Shop rear differential.

That differential is what makes this Dodge so impressive, as most modern Challengers that are racing towards the 7-second quarter mile range have swapped to a solid rear axle setup, but Barber continues on with a modified version of the stock differential setup.

The New Record
When we first talked about Todd Barber’s Challenger last year, it had run a respectable best-time of 8.627 at 156.72 miles per hour, but this season, his Dodge is a whole lot quicker.

At the MSHS Rockingham event, Barber made a handful of passes in the 8.30 range, allowing him to race his way to the Super Pro class finals. You can watch that incredible battle of Mopar monsters in the video below. The Jeep driven by Harrison Zauke gets the win, but with a run of 8.356 at 165.44mph on that run and 8.332 at 163.79mph on a previous run, Barber set a new personal best record with his Challenger.

Crank up your speakers and enjoy the video of Barber’s Challenger taking on Zauke’s Jeep at the Modern Street Hemi Shootout Rockingham event below.