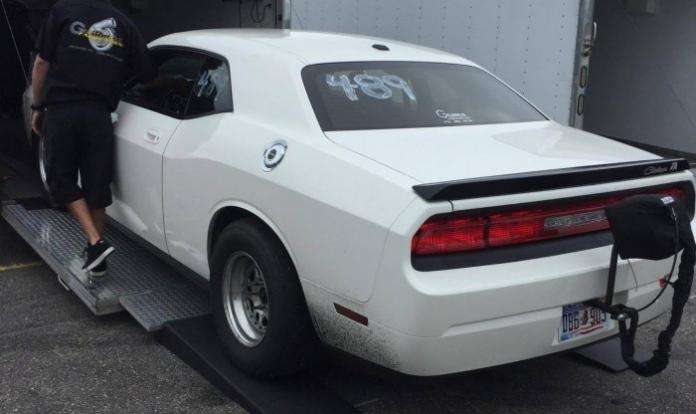 We talk a great deal about the world’s quickest Dodge Challenger SRT Hellcats, but the quickest modern Challengers on the street are not Hellcat cars and Todd Barber’s twin turbo Challenger R/T is a great example – running through the quarter mile in the mid 8-second range.
Advertisement

I don’t know this Challenger ranks in terms of the quickest street driven modern Dodge muscle cars, but with the ability to reel off 8.6 quarter miles, this is one of the baddest modern Dodge Challengers.

The standard 5.7L Hemi of the Challenger R/T is long gone and in its place is a 414 cubic inch Hemi from Modern Muscle. This monster Mopar V8 is topped with worked cylinder heads from a 6.1L Hemi and the engine is fitted with a pair of 67mm turbochargers from GearHead Fabrications, allowing this Challenger to pack far more than the standard 375 horsepower with a tune from Brian Mcmahan at Drag On Resources. The twin turbo Hemi transfers the power to the rear wheels via an ATI T400 transmission and a DriveShaft Shop rear differential.

This street driven, twin turbo Challenger R/T has run a best time of 8.627 at 156.72 miles per hour and at the first Modern Street Hemi Shootout of this season, Barber and his TT Challenger R/T went head to head with Jason Epling in the world’s quickest Hellcat car and beat the Hellcat – claiming the Super Pro class at the event.

Best of all, Todd Barber had only taken his twin turbo Challenger R/T to a handful of events when he ran his 8.627, so with more seat time, Barber expects to run even better times with his monster Mopar muscle car later this season.

The videos below show Barber’s Challenger R/T making an 8.6X quarter mile run at the Modern Street Hemi Shootout along with beating the Epling’s Garage Hellcat.