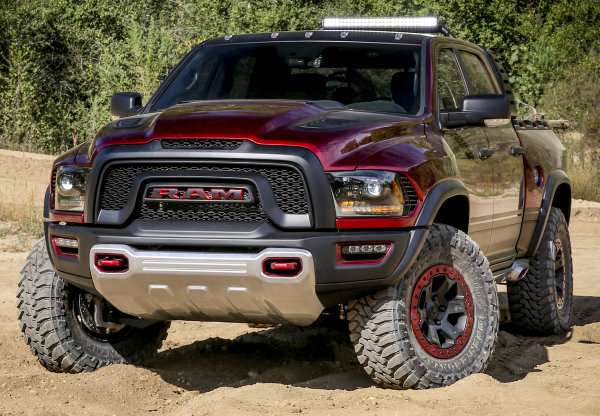 Full size trucks are the most popular vehicles in the US market and with 2016 being a big year for big trucks, we have put together a list of some of the most significant news stories of our 2016 coverage of the full size truck segment in the US – including Ford, General Motors, Nissan, Ram and Toyota.
Advertisement

The Ford F Series, the Chevrolet Silverado and the Ram Pickup are the three bestselling vehicles in the US market and throughout the 2016 calendar year, many of our biggest stories from the full size truck segment came from Ford Motor Company, General Motors or FCA. However, with Nissan introducing their new diesel Titan this year while Toyota continues to close ground on the Big 3 with its Tundra – we are likely to see the popularity of big trucks continue to rise in the coming years.

As part of our 2016 year in review, here is a quick look at some of the biggest stories from each of the automakers offering a full size truck in the US market – organized in alphabetical order.

GM’s Big Diesel Trucks Get Big Diesel Power
Prior to the introduction of the 2017 Chevrolet Silverado HD and GMC Sierra HD, the General Motors diesel heavy duty pickups had fallen far short of Ford or Ram in terms of power and capabilities. That all changed with the introduction of the new 2017 Silverado HD and Sierra HD, as the new 6.6L Duramax diesel offers 445 horsepower and 910lb-ft of torque – putting the Silverado and Sierra in the hunt for the segment’s toughest trucks.

A Review of the Nissan Titan with the New Cummins Diesel Engine
It can be argued that there was no bigger big truck news in 2016 than the long awaited arrival of the Nissan Titan XD with the new Cummins Turbo Diesel engine. Nissan stepped up their full size truck game in a big way with the introduction of their own Cummins engine and Denis Flierl put one of these new trucks through its paces to see if it is worth the buzz. (More on Page 2)

The Ram Gets a Hellcat Concept
2016 was a big year for FCA’s Ram Brand, with the arrival of the new Ram Rebel and the introduction of the new Ram 2500 Power Wagon, but it was a concept truck which drew the most attention here on TorqueNews. The Ram Rebel TRX Concept (shown above) features a host of modifications over the “normal” Ram Rebel, but nothing is more important than the Hellcat Hemi tucked under the hood.

This is only a concept truck right now, but with the Ford Raptor doing so well and such a strong demand for a high performance Ram truck – we are keeping our fingers crossed for a production version of the Hellcat-powered Rebel TRX Concept.

Two Great Toyota Stories to End 2016
Finally, while the folks at Toyota had plenty of truck news during 2016, the majority of that news pertained to the smaller Tacoma. However, we had a few Toyota Tundra stories here at TorqueNews which deserve to be revisited before the end of the year.

First, John Goreham sat down with Toyota truck boss Mike Sweers to ask a few questions about the newest Tundra, offering some interesting insight from the man who has brought Toyota’s trucks to where they are today.

Next, we seldom hear about any vehicles making it to a million miles – especially in the case of a hard-working pickup truck – but one Toyota Tundra owner recently eclipsed the 1 million mile mark, and Toyota traded him for a new Tundra so that they could go over his truck to see what kind of damage it sustained in more than a million miles of hard work.

Why Did Toyota Want This Guy's Old Tundra Back So Badly?