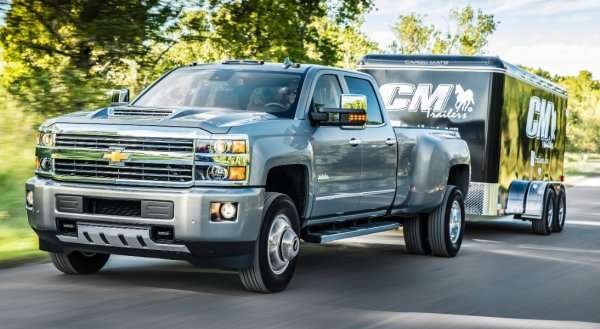 General Motors has announced the official power numbers for the 2017 Chevrolet Silverado HD with the 6.6L Duramax diesel and after lingering far below the competition over the past few years, the GM diesel finally has the power to properly compete with the Ford PowerStroke and the Ram Cummins – although we still don’t have towing or hauling numbers for the new Chevy.
Advertisement

Over the past few years, Ford and Ram have been engaged in a tight battle over who has the most powerful and the most capable heavy duty truck. The Ford PowerStroke and the Ram Cummins have both taken turns being the truck with the most torque and the most capable of towing, but along the way, the Chevrolet Silverado has gone relatively unmentioned in that battle – due mostly to the fact that the GM Duramax diesel engine has been far less powerful than the other two engines.

That all changes with the 2017 Chevrolet Silverado, as GM has beefed up their Duramax diesel to produce the kind of power needed to really compete with Ford and Ram. In fact, the 2017 Silverado will offer more horsepower than both the Ram and the Ford, while packing more torque than the Ram and only slightly less than the Ford.

2017 Silverado HD Diesel Power
The 2017 Chevrolet Silverado HD will be powered by a similar 6.6L Duramax diesel as the current (2016) models, but GM has completely revamped this engine for the new model year. As a result, the horsepower rating climbs from 397 horsepower to a segment-leading 445 horsepower while torque levels climb from 765lb-ft to 910lb-ft – improvements of 12% and 19%, respectively. That is obviously a big jump in power for Chevy, but more importantly, these new numbers compare far more favorably to the competition.

The 2017 Ford Super Duty (F250, F350 and F450) is offered with a 6.7L PowerStroke diesel which delivers 440 horsepower and 925lb-ft of torque and the 2017 Ram Heavy Duty (2500, 3500) features a 6.7L Cummins Turbo Diesel which packs 385 horsepower and 900lb-ft of torque. With the new figures for 2017, the Silverado HD with the optional Duramax diesel will have more horsepower than both of the crosstown rivals and more torque than the Ram – allowing GM to jump into the battle of America’s most powerful heavy duty pickup.

Towing Numbers Unknown
While GM has announced the power figures for the 2017 Chevrolet Silverado HD with the diesel engine, the company has not announced the towing or hauling capabilities for the new heavy duty truck, and that is another area in which the older Chevy pickups struggled to compete.

For example, the most capable 2016 Silverado 3500HD will tow 23,200lbs. This is a respectable number and really, few truck owners will ever need to tow anything that weighs more than 24,000lbs. However, when you look at the fact that the Ford F350 will tow 32,000lbs and the Ram 3500 will pull 31,210lbs, both of the competitors have a huge advantage in towing capabilities.

GM’s move to increase the horsepower and torque of the 2017 Chevrolet Silverado Duramax engine will play a big part in getting their trucks into the conversation with Ford and Ram, but a truck built to work cannot thrive on power numbers alone. GM will need to increase their towing capacity well beyond that of the 2016 models if they want to have a real chance of claiming the title of the toughest heavy duty truck in America.

With the 2017 model year rapidly approaching, it shouldn’t be long before we get the official towing and hauling numbers for the new Silverado HD and when those numbers finally arrive – we will see whether the new GM heavy duty trucks can really compete with the Ford and Ram trucks.

RudolphTheDiesel wrote on October 2, 2016 - 4:29pm Permalink
The numbers race has near zero relevance to actual use of these vehicles. Now that these trucks have all the power you can use, 10% in hp, haul or tow rating makes zero practical difference exc for a specific use. About the only people who will use over 25K towing with this class of rig are hotshot freight operators, where a pickup is used as a substitute for a semi-tractor. With no sleeper cab, the driver must either complete a trip or check into motel within 11 hours driving time. There's nothing you'd want to haul in a pickup bad that weighs over 3 tons, if your loads will commonly be over that you'll want a flatbed or dump and a medium truck chassis under it. It does have a bunch of advantages over a semi-tractor and costs waay less. So there's one job where you'll actually use that 900 lb/ft. With the extra powah, it'll take less skill and patience to move a heavy load. Mostly, it'll be more fun to drive, which is worth something. Meanwhile, you're paying for all that motor plus the drivetrain, frame and suspension to back it up and hauling around the 7-8000# empty weight of vehicle. If you don't have a big job for one of these diesel pickups to do, it becomes a chrome fireplace you toss money at.
Steve wrote on January 3, 2017 - 9:52am Permalink
I always read these "nobody actually uses these heavy duty trucks" comments and chuckle. It's quite the opposite, though you have one fact right they allow someone to pull large, heavy loads w/o buying a Peterbuilt, Mack, etc, which start upwards of $200k, true used you can get them for far less, however they will still get 2 mpg and are usable only for hauling. The new heavy duties sell like hotcakes because they essentially open the door for small business to get products out, unloaded these will get respectable mpg's , driven with sense 18 mpg is easily attained, some have reported 20 from the Ford super duty. Consider if that business owner had to own a Peterbuilt AND a car, they might not be in business at all, the arrival of this class trucks have done more for rural U.S. of A than any politician elected in the past 40 years.