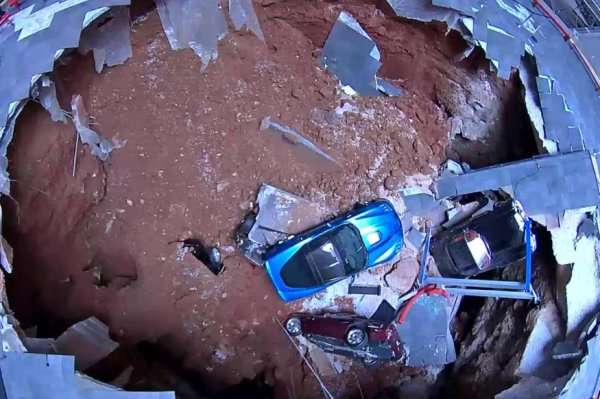 We have some good news about the tragic sinkhole which swallowed up 8 historic Chevrolet Corvettes at the National Corvette Museum – extraction of the damaged cars is scheduled to begin on Monday March 3rd.
Advertisement

Since the floor of the National Corvette Museum’s Skydome exhibit collapsed due to a massive sinkhole in the wee hours of February 12th, the company responsible for clearing out the hole of the cars and debris before repairing the museum itself has been working to make sure that the area in which they need to work is safe. Removing those Corvettes from the sinkhole and repairing the structure will require a collection of heavy machinery so before moving anything else into the Skydome, the team had to be sure that the ground could support the weight of those items and to make sure that the area is safe for the people who will be participating in the extraction and the rebuilding process.

The good news is that there appears to be no other areas of the National Corvette Museum – either in the Skydome or in other parts of the property – which is at risk of a collapse. With the ground seeming to be good and sturdy, the team has officially been given the go-ahead to bring in the machinery needed to begin the extraction of the historic Corvettes that were swallowed by the Earth earlier this month.

This first phase of vehicle extraction at the National Corvette Museum will likely bring three of the historic Chevrolet Corvettes out of the hole. The first, and easiest car to remove will be the Corvette ZR-1 Blue Devil followed by the Ruby Red 40th Anniversary Corvette. Finally, phase one of the extraction process will include removing the black 1962 Corvette that is perch vertically above the other cars. The problem with the ’62 Corvette is that there is a massive 10,000 pound slab of concrete propped against the front end. If the team just tries to pull the ’62 Corvette away from that concrete, the 5 ton slab could shift and cause more damage to the ’62 – or it could tumble down into the hole and cause further damage to one of the other classic American performance cars. Because of that, the extraction team will have to remove the 1962 Corvette and that 10,000 pound chunk of concrete at the exact same time.

Scott, Murphy & Daniel Construction expects to begin removing the damaged Chevrolet Corvettes on Monday morning, but they expect that phase one could take until Wednesday to complete. Once those first three cars (and that precariously perched 5 ton concrete slab) have been removed, the team will be able to get into the hole to re-evaluate the location and positioning of the other vehicles; planning out the next phase of extraction as quickly as possible. Unfortunately, while removing the first three Corvettes in the sinkhole will be relatively simple with the exception of the concrete slab resting on the 1962 Corvette, removing the partially buried cars will likely be far more time consuming and delicate.

Finally, there is the fact that both the 1,500,000th Corvette and the Mallet Hammer Corvette are both completely buried so the team will need to remove many layers of cars, dirt and building debris before they can even begin to put together a plan for the removal of those final cars. In other words…this process is only to get more difficult as time goes on.

One other piece of good news is that the extraction of the first three Chevrolet Corvettes in the sinkhole will allow the National Corvette Museum to begin putting together the special display for the damaged Corvettes. As each of the cars are removed, they will be moved to a new display showing the sinkhole cars that are now being referred to as “The Great Eight”. This limited time display will last through the extraction process and it will allow fans to see these historic Corvettes before they are shipping to Michigan for a full restoration by General Motors.