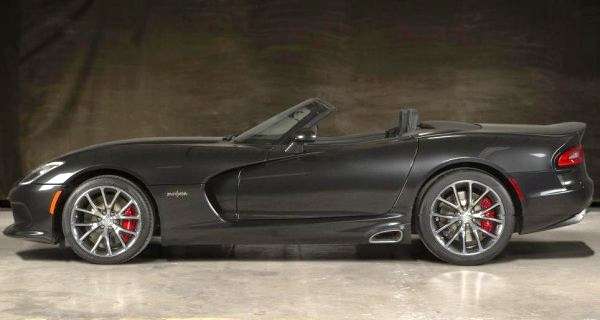 This New SRT Viper Roadster Doesn’t Come from Dodge
You might be thinking to yourself “if there is a new SRT Viper Roadster…why haven’t I heard about it in any Dodge or Chrysler Group material?” Well, that is because neither Dodge nor the Chrysler Group are actually responsible for the production of the new Viper Roadster. In fact, you cannot even order this topless supercar from your local Dodge dealership unless your local dealership is Tomball Dodge in Tomball Texas, because this convertible is being produced by a third party company.

Prefix Performance of Auburn Hills Michigan is best known for being the Tier 1 supplier who is currently responsible for painting the SRT Viper coupes rolling off of the Connor Avenue assembly line, but the company is looking to spread its wings a bit more. Its first effort is to convert the 2013 and 2014 SRT Viper from a coupe into a roadster – with the result being the Prefix Viper Medusa Roadster. Prefix is marketing these custom topless Vipers through Tomball Dodge (the nation’s leading dealership in terms of Viper sales) and to start, they are offering just 10 examples before committing to building any more.

Based on the images provided by Prefix, the result of their Medusa Viper package is an SRT supercar that looks very much like a factory build. While the car clearly looks best with the cloth top folded down, it has a full coverage canvas top like your average production car. Also, since the chassis of the current Viper was designed with a roadster in mind, Prefix doesn’t need to reinforce the chassis to compensate for the lack of a roof. This means that the Prefix Medusa Viper doesn’t gain lots of weight like most aftermarket convertible version – actually weighing 70 pounds less than the normal production Viper coupe.

In reading through the various automotive forums, many Dodge/SRT/Viper enthusiasts are more annoyed by this package – and the massive price tag – than they are excited to finally see a Gen V Viper droptop. The Viper already isnt selling well, so introducing a third party package that is only available through a dealership in Texas with a price tag that is a Dodge Challenger R/T more than the factory production Viper might be a tough sell…which is likely why the company is only committing to 10 units at first.

In the long run, I have little doubt that Tomball and Prefix will having a hard time selling all ten of the first SRT Viper Medusa Roadsters. $35,000 might seem outrageous to us, but to someone who has no issue cutting the roof off of their $100k+ supercar – it might seem like pocket change in exchange for having one of the rarest high performance American cars in the world.

What I really don’t get is why they would name their Viper Roadster project Medusa. For those unsure, Medusa is a figure in Greek mythology that had a head of hair comprised of snakes but worse yet, she was so graphically ugly that she could turn people to stone simply by making eye contact with her. I don’t get name a project after a famously ugly monster…but at least their topless Viper looks great.