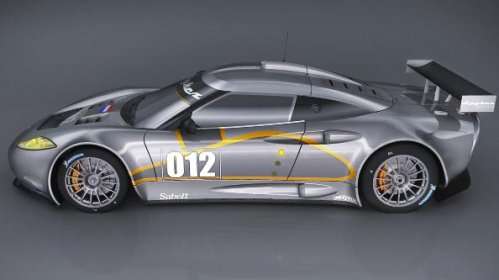 The folks at Spyker have been very busy over the past few months showing off new Saab models around the world (with some of those beginning production) along with selling the Spyker cars brand to the company that had been producing the chassis and body panels for the company but that hasn’t stopped them from planning a new Spyker race car based on the C8 Aileron.
Advertisement

The new Spyker C8 Aileron GT has been developed by the Spyker Squadron – the company’s racing division – specifically to meet the requirements of the Automobile Club de l'Ouest's new GTE class specifications and when the C8 Aileron race car is ready for competition it will effectively replace the C8 Laviolette GT2R. According to the Spyker Squadron, they are already working with several teams to get the new C8 Aileron GT racer on the track when ready. The company hopes that the success of the new race program will help attract more potential customers, even though they recently sold the Spyker Cars brand to CPP Global Holdings (click here for more on the sale).

There have been no more details offered on the new Spyker C8 Aileron GT race car, but Spyker Squadron Managing Director, Peter Van Erp, offered the following look into the future of the Spyker factory-backed racing efforts:
"We are taking a racing sabbatical this year to concentrate our resources on developing a new GT racer based on Spyker's new C8 Aileron supercar, instead of continuing to spend money on a car at the end of its development cycle. For the long term future of Spyker Squadron, and for its role in the promotion and technical development of Spyker road cars, it's a positive and strategically important step.

We will develop the car for the new GTE class, although after its first season we will assess whether there is sufficient demand to develop a variant to FIA GT3 specifications. This would be relatively straightforward and would increase the potential customer base for the car and associated race support package. We are already attracting customer race teams wishing to buy an off-the-shelf car, with enquiries arriving from Europe and the Far East.

Ultimately, our fans can look forward to a very exciting long term future following Spyker in top-flight endurance racing, with both the Spyker Squadron and customer racing teams fielding C8 Aileron GT cars. And as a result, Spyker will become an even more prominent and successful name in endurance motorsport around the world in 2012 and beyond."

Hopefully as we near the 2012 racing season, Spyker will offer more information, specifically what will power this sharp-looking race car when it takes the track next year. In any case, it will have fairly big shoes to fill as the C8 Laviolette GT2R has been the most successful race car in the company’s history, with a pair of second place finishes in the Le Mans GT2 Series and a fifth place finish in the 24 Hours of Le Mans.

Other Spyker News:
Spyker sells Spyker Cars, keeps Saab
The Saab Phoenix Concept debuts in Geneva
The first new Saab 94x rolls off the assembly line
The next Saab 9-5 SportWagon leaked ahead of the Geneva debut