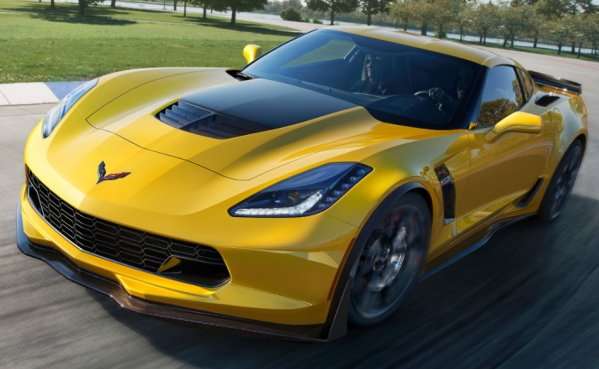 General Motors has announced the official power figures for the 2015 Chevrolet Corvette Z06 and with 650 horsepower, it is the most powerful GM road model ever – while also being the second most powerful American road car ever and ranking in the top ten most powerful production cars sold in the world today.
Advertisement

When General Motors introduced the 2015 Chevrolet Corvette Z06 at the 2014 North American International Auto Show in Detroit, they promised that it would have “at least” 625 horsepower and 635lb-ft of torque. They went so far as to put a badge on the dash of the cars on display at the Motor City show with those exact numbers – seemingly making them seem almost official. However, with the announcement of the official power numbers for the C7 Corvette Z06 – the company has blown away those preliminary figures.

“The LT4 Small Block sets a new benchmark for power and torque at GM,” said Steve Kiefer, vice president, GM Powertrain Engineering. “The engine also puts the new Corvette Z06 on par with the most powerful supercars offered in America, while delivering performance with impeccable manners that make it suitable for daily driving.”

The new Chevrolet Corvette Z06 packs 650 horsepower and 650lb-ft of torque, so while it is promised to be the most track capable Corvette of all time; it is also the most powerful Corvette of all time. Oh, it is also the most powerful General Motors road car ever while ranking second all-time among American cars – trailing only the Ford Shelby GT500 Mustang that packed 662 horsepower. In relation to the high performance cars around the world, the C7 Corvette Z06 ranks 9th among new vehicles on sale today and in addition to the aforementioned Mustang, it joins the ranks of some of the most well known and most expensive exotic cars in the world. The top ten most powerful production cars sold in the world today are as follow with their horsepower, torque, and MSRP.

When you look at that list, the 2015 Chevrolet Corvette Z06 now ranks among some amazing high performance cars from some of the world’s most legendary performance names. For those folks looking to buy one of the most powerful cars on the new car market, the C7 Z06 challenges three Ferraris, two Lamborghinis, a Porsche, a McLaren and a Ford. More impressively, the only cars on the list of the world’s most powerful new production road cars that pack more torque than the new Corvette Z06 are LaFerrari and the McLaren P1 – cars which cost $1.4 million dollars and $1.15 million dollars respectively.

“Torque is the pulling power of an engine and the LT4’s abundance of it at every rpm in the engine’s speed range helps the 2015 Corvette Z06 accelerate quicker and respond nearly instantaneously,” said Jordan Lee, chief engineer for Small Block engines. “It’s the very definition of power on demand.”

The pricing hasn’t been announced for the new Z06, but we expect it to be in a similar range to the previous C6 ZR1…so somewhere in the $125k range. With the exception of the GT500 Mustang and the Viper, you could buy several new Z06 fastback Corvettes for the price of the other top ten most powerful cars in the world. You could buy 32 new Z06 fastbacks for the price of the Lamborghini Veneno – and all 32 of the Corvettes would likely beat the Lambo around a race track.

Not only will the 2015 Chevrolet Corvette Z06 challenge these supercars (and the Mustang) in terms of raw power, but the automaker’s promise that it will be the most capable will likely allow the new Z06 to beat many of these cars around a road course as well. Considering that the only car on that list above which beat the “old” Corvette ZR1 around the famed Nürburgring was the Porsche 918 – and the C7 Z06 is supposed to be better than the C6 ZR1 – the newest super-Vette will almost certainly best all but the hybrid Porsche. Unfortunately, the 918’s time of 6:57 at The Ring will be quite a feat for the Z06 but those owners who buy the most powerful GM road car ever won’t have to worry too much about any new car beating them on the road or on the track.

The 2015 Chevrolet Corvette Z06 is expected to arrive in dealerships around the US in the 4th quarter of 2014.

John Goreham wrote on June 6, 2014 - 12:59pm Permalink
I love stories like this that point out the 'Vette is the world's top car in real terms. The difference in my mind between a Corvette, even a special one like a Z06, is that it is a real car. I could order one, or buy one off the lot today. I'd have it either tomorrow or in a month or two. There is no such thing as a LeFerrari. There is no such thing as a Lambo Aventador. Those are made-for TV imaginary cars. There is really no way that you, or I, or a lottery winner in our neighborhood, or our wealthiest friend can get one of those cars new. The tiny number produced are sold to multi-billionaire, multi-exotic car owners and celebrities before they are scheduled for production. I drove a new Corvette Stingray in September. A co-worker of mine (previous job) owned a special Corvette and I rode in it. My neighbor a few doors down has a special Corvette in his garage. The exotic cars on the above list (Viper aside) are unicorns. Nice to dream about, hard to put a saddle on.
Jim Griffin wrote on June 6, 2014 - 11:11pm Permalink
Where's the Bugatti Veyron.
JCS wrote on June 7, 2014 - 12:19am Permalink
Love the look of the C7. Where's the Veyron SuperSport or Koenigsegg in your list? Granted they are out of the price range of anything but the wealthiest of wealthy but their numbers do surpass everything in that list which would bump the C7 Z06 out of the top 10. Not trying to cheapen it. I really do love the C7. I've really been thinking about getting one myself. I just need more than 2 seats. Bring back the GTO or G8 and put that motor in them!!
John Himes wrote on June 10, 2014 - 1:42am Permalink
I Love the fact that an American car company is building a 'SuperCar' that competes with (and beats in most cases) the Best and highest priced SuperCars the world has to offer at literally a Fraction of the price! I would be willing 2 bet that the Z06 will get by far Better gas mileage than anything else on this list?