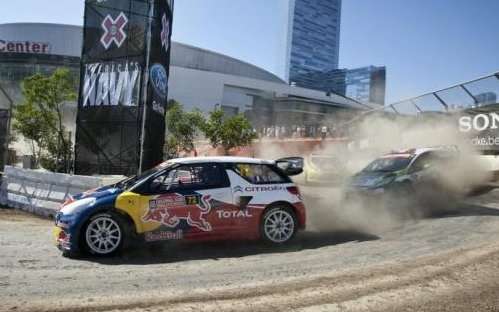 Last weekend marked the third stop on the 2012 Global RallyCross season as the cars took to the Los Angeles street course of the 2012 X Games and when the final checkered flag dropped – rally legend (and Global RallyCross rookie) Sebastian Loeb ran away with the gold metal while Ford drivers Tanner Foust and Brian Deegan took home the silver and bronze.
Advertisement

As the Global RallyCross season entered its third event of the season, which took place at the 2012 X Games in Los Angeles, Marcus Grönholm looked to extend his season lead but those plans were dashed early when Grönholm was involved in a violent impact during practice. Grönholm hit the wall hard enough to tear the left front wheel off of his Best Buy Ford Fiesta, sending him to the hospital and taking him out of the competition. Grönholm’s teammate Toomas Heikkinen also left the field before the first real race began when he failed to clear the 75 foot jump during practice. Heikkinen’s Fiesta rally car fell just short of the massive jump, with the nose of his car slamming into the face of the jump base before the car rolled onto its lid and landed upside down. Heikkinen suffered a broken ankle that kept him out of the 2012 X Games field and required him to have surgery while his peers were racing.

This meant that the 2012 X Games gold was really up for grabs with Grönholm out of the race after the Finnish driver dominated the first two events of the season. However, with European rally racing superstar and 8 time World Rally Champion Sebastian Loeb showing up with his Red Bull Racing Citroen DS3 XL rally car, the drivers knew that it would be no easy task to take home 2012 X Games gold. Loeb has won the World Rally Championship each of the last 8 years, racking up an incredible 72 wins since 2001. As one of the most successful rally drivers in the world, being a rookie to Global RallyCross didn’t prevent Loeb from being the early favorite – especially in Grönholm’s absence.

The Racing Begins
The typical RallyCross action started early when, during the first heat race of round one, top qualifier Ken Block had his Ford Fiesta run into from behind by Dave Mirra in his Subaru Impreza WRX STi. Both cars were able to continue but this mix up put Block so far behind Sam Hubinette and his Saab 9-3 that Block was unable to catch up and offer any pressure for the heat race win. Hubinette and Block both secured their places in the X Games finals with their first and second video. Dave Mirra and Liam Doran were forced to head into the Last Chance Qualifier (LCQ) for their chance at the X Games finals.

The second heat race was far less dramatic with Sebastian Loeb and Tanner Foust dueling throughout the race with Loeb winning and Foust finishing second as those two drivers headed onto the finals. Buddy Lasek and his Subaru Impreza was forced to head to the LCQ with Stephan Verdier in his Hyundai Veloster.

In the third heat race of round 1 for the 2012 X Games RallyCross event, European rally champ Svere Issachsen took the early lead and held off Brian Deegan as those two moved onto the finals. Brian Menzies (driving Travis Pastrana’s back up Dodge Dart) and Rhys Millen in the Hyundai Veloster would head into the LCQ.

The final heat race was the most controversial with only two cars taking the green flag after a red flag condition that occurred in the first turn of the race. Travis Pastrana, Andy Scott, David Binks and David Higgins lined up and Pastrana got a great start – leading the field into the first turn. Unfortunately, Andy Scott ran far too deep into the corner and was unable to slow down his Saab 9-3 rally car – slamming into the back of Pastrana’s #199 Dodge Dart and forcing it hard into the outside wall. David Binks then ran into the side of Scott’s Saab while Higgins was able to lock up the brakes and avoid running into the pile-up. Pastrana’s Dart rally car was far too badly damaged to continue and Scott was black flagged and removed from the race after his flagrant cheap shot. This gave Binks and Higgins free passes into the finals.

During the Last Chance Qualifier races, Rhys Millen and Liam Doran each won their respective LCQ to move onto the 2012 X Games finals.

In the an X Games final round that was plagued with false starts and red flags (that brought about more restarts), Sebastian Loeb was very clearly the best car in the field as he effortlessly pulled away from the field at each start and restart – comfortably beating out Ken Block to claim his first ever X Games gold model. Ken Block had his best Global RallyCross outing of the year in claiming X Games Silver and Brian Deegan (gold medal winner of the 2011 X Games) came home in the third spot to claim the bronze medal. Block's Silver medal finish may have been the most impressive showing, considering that the DC Shoes/Monster World Rally Team Ford Fiesta blew a tire with three laps left. Block ran the last three laps with no right rear tire - drifting around the turns on a bare rim as he managed to stay ahead of Brian Deegan.

Complete standings from the 2012 X Games final round:

Check out the video of the 2012 X Games finals below courtesy of YouTube user RicardoLarrein.