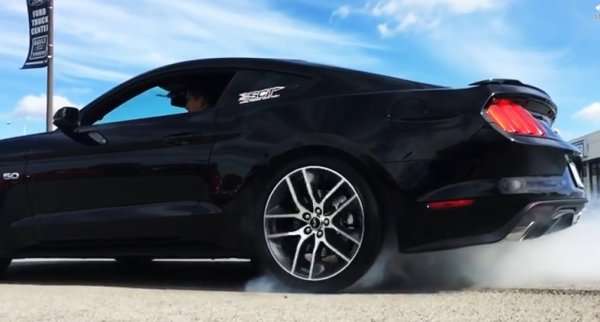 We knew that we would be seeing some solid performance numbers for the 2015 Ford Mustang once it reached the hands of private owners and with one of those first private owners being the tuning super gurus at SCT Performance, we have some great stock drag strip numbers and very impressive stock horsepower numbers for the next gen pony car.
Advertisement

When the first batch of reviews of the 2015 Ford Mustang hit the internet last month, we were surprised to see that performance times on the quarter mile were comparable-to-slower than the outgoing models. We knew that the 2015 Mustang was heavier, but it still came as a surprise that some of these reported numbers were not better. However, we all knew that once 2015 Mustangs began reaching the hands of private owners, we would see much more respectable times.

Well, the first 2015 Ford Mustang units have reached some owners and one of those owners is the collective group of tuning masterminds at SCT Performance. This past weekend, SCT got their new 2015 Mustang GT on the dyno and on the track, and they achieved impressive figures in both cases.

The SCT Performance 2015 Mustang GT
Before getting into the numbers on the 2015 Ford Mustang GT being tested by SCT Performance, a bit about SCT for those who are unfamiliar with the name. SCT is one of the biggest names in the modern performance world, offering “tuners” that connect to a vehicle’s on board diagnostics system to gently coax out more power without any other modifications. The Ford Mustang is undoubtedly one of the most popular vehicles to modify for performance so SCT Performance will be quick to roll out a power-adding tool for new Mustang buyers. To do that, they need a test car and that is why SCT has one of the first production units of the next generation Mustang.

While SCT Performance will surely make some big news of their own once they begin working on performance engine calibration tunes for the 2015 Mustang GT, today Im focused on their baseline testing of the new pony car.

SCT 2015 Mustang GT on the Dyno
When fitted with the 6-speed automatic transmission, the SCT Performance 2015 Ford Mustang GT made 361.85 horsepower and 345.39lb-ft of torque at the rear wheels. Those numbers were recorded with the Mustang running in 4th gear and when the car shifted to 5th gear, the peak torque rose to 353.02, but peak horsepower dropped to 339.43. Those are very solid figures for a stock vehicle and when you look at the advertised numbers of 435 horsepower and 400lb-ft of torque, the self-shifting Mustang is “losing” around 17% of its power between the flywheel and the road. That is a touch higher than the 15% drivetrain loss figure that is typically used for calculating a rough wheel horsepower figure, but it is also with an automatic transmission that generally eats up more power on the way to the wheels.

Attacking the Quarter Mile
More importantly, the folks from SCT Performance took their 2015 Ford Mustang GT to the drag strip and their times were much, much better than the times from the first media drives. Where most media outlets reported quarter mile times in the low 13 second range, SCT was able to take their showroom-stock 2015 Mustang GT and run a 12.86 at 107 miles per hour. Compare that time to the media norm of 13 flat, and you have yourself a quarter mile time that is much easier to swallow for those prospective Mustang owners looking to go drag racing. It should also be pointed out that a well driven 2015 Mustang GT with the 6-speed manual transmission is likely to be even quicker through the quarter mile so stock times could be even better than the 12.86 by SCT.

We will keep following SCT’s progress with their new Mustang to see how much extra power they can pull from the stock 2015 GT and in the meantime, check out this video of their Mustang doing a monster burnout.

The image at the top of this piece is a still captured from the SCT burnout video show here.