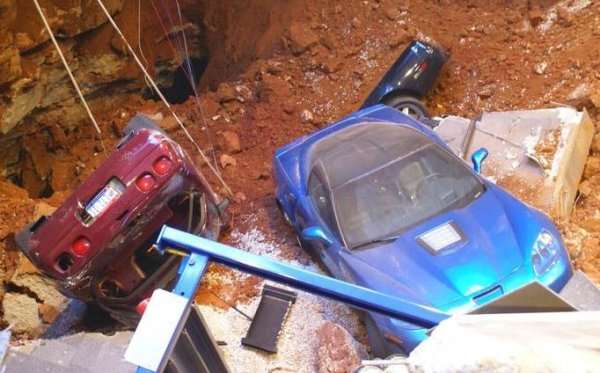 We know now that General Motors has agreed to repair the eight cars damaged by the sinkhole at the National Corvette Museum in Bowling Green Kentucky – but removing those rare Corvettes will be an intricate and involved process that is expected to take two to three months.
Advertisement

Building contractor Scott, Murphy & Daniel of Bowling Green has been hired to handle the repairs to the building and the land underneath the building while also extracting those eight rare and historical Corvettes that plunged into the massive sinkhole on February 12th. Since the tragedy happened last week, engineers have been measuring different portions of the National Corvette Museum property to make sure that no other parts of the building are falling away.

Fortunately, it seems that the sinkhole under the floor of the Skydome – while gigantic – was only under the section of the floor that collapsed and the rest of the property appears to be strong and sound.

Once the ground was deemed to be safe for both the rest of the museum and the heavy equipment needed to begin the repairs to the building and the extraction of the historic Corvettes, roof panels of the Skydome and portions of at least one wall have been removed to allow a crane to access the room – and the gaping hole in the floor. Removing roof panels required the company to add extra supports to the rest of the curved roof while also building a bridge of sorts inside of the damaged Skydome to get the items needed to begin the repairs from one side of the room to the other. Once the entire structure has been reinforced and modified to accommodate the tools and machinery needed to begin the work, the extraction process will begin.

A representative from the building contractor expects that the preparation stage will take another 2-3 weeks and once the actual extraction process begins – we could be looking at another 2-3 months before all of the cars are out of the hole.

That is a pretty large window for what seems to the average Joe like a simple job of using a crane to lift the cars out of a big, open hole and up through the roof of the National Corvette Museum. The problem rests in the fact that the team cannot see two of the Corvettes as they are buried in dirt, debris from the museum floor and 6 other Corvettes. The crew will need to remove the cars as gently as possible as to avoid doing any more damage so it will take some careful planning to get those Corvettes up and out of the building without causing the other cars in the hole to shift or without causing further damage to the car as it is being hoisted away.

In reading a variety of reports around the web from both engineers and geologists, it seems as though the removal of the 8 damaged Corvettes will be very much like an archeological dig. The cars are essentially stacked in layers with layers of dirt, rock and crushed concrete between the cars. The contractor will vacuum as much of the dirt and loose debris as possible from around each car before removing the wheels and hooking the cars up to the powerful cables of the crane. As each car is removed, it will allow the construction company more access to the other cars – after removing more dirt and debris, of course. Much in the same way that an archeologist carefully brushes away the dirt around the skeleton of a Tyrannosaurus Rex, Scott, Murphy & Daniel will remove the dirt that is hiding some of the world’s most valuable Corvettes.

In the meantime, you can view the 8 Corvettes prior to falling into the sinkhole by clicking any of the thumbnail images above.