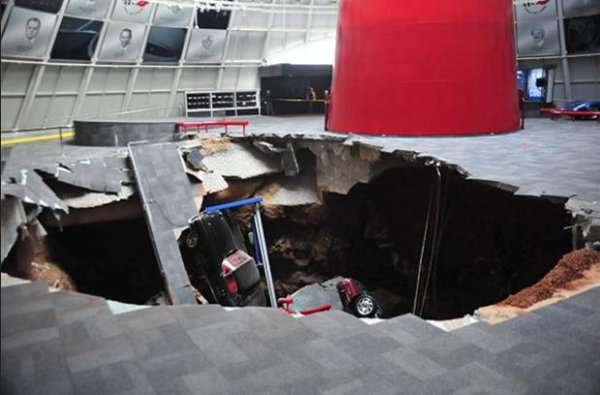 The National Corvette Museum took a tremendous hit this morning as a sinkhole under the property caused a portion of the building to collapse – literally swallowing eight rare, historically significant Chevrolet Corvette models from inside the Museum’s Skydome.
Advertisement

Details are limited right now as officials from the National Corvette Museum in Bowling Green Kentucky continue to sort through the damage, but what we know right now is that at 5:44am this morning, the security system was triggered in the Skydome portion of the Corvette Museum. When security personnel arrived, they found that the floor of the Skydome had given way to what must be a massive sinkhole and 8 historic Corvettes had literally been sucked into the Earth. The good news (if there is good news here) is that none of those 8 Corvettes were on loan from private owners, but the bad news is that 8 rare Corvettes are buried in the rubble. It is unclear whether these Corvettes can be recovered and if they can – it is hard to say whether they can be repaired.

Sinkholes can range from a few feet to hundreds of feet so there is a chance that these 8 rare Corvettes have simply fallen a short distance through the floor, but there is also a chance that they have plunged hundreds of feet down with the debris from the building itself. News reports from the area refer to the 8 Corvettes as being gone while the National Corvette Museum simply refers to those cars as being “affected” by the sinkhole. With any luck, the damage isn’t as bad as it sounds with the cars being damaged and not being buried deep below the museum.

There were two Chevrolet Corvette models claimed by the sinkhole that were on loan from General Motors. This included the 1993 Corvette ZR-1 Spyder Concept and the 2009 Corvette ZR-1 Blue Devil Concept – both of which cannot be replaced by another car. I mean, there is a chance that GM has another example of each of those two unique concepts, but I am guessing that is not the case.

The other six cars swallowed up by the sinkhole were owned by the National Corvette Museum. This list included a 1962 Corvette, a 1984 PPG Pace Car Edition, a 1993 Ruby Red 40th Anniversary Edition and a 2001 Mallett Hammer Edition Corvette Z06 – all of which will be hard for the museum to replace. Worst of all, the final two cars stolen by the sinkhole were the 1 millionth Corvette built (a 1992 model) and the 1.5 millionth Corvette built (2009 model). The museum may be able to replace the first four cars mentioned above, but there will never been another 1 millionth Corvette built so we can only hope that the 1992 and 2009 model year Corvettes that were such significant unit numbers can be recovered and repaired.

Update: The National Corvette Museum has issued a pair of images showing the huge hole in the floor of the Skydome. We can see in the image that the 1962 Corvette is perched on end and we can see the wheel of what looks to be a C5 - presumably the Ruby Red 40th Anniversary Edition Corvette. You can see that the hole is incredibly large and fairly deep but the cars should be recoverable. Whether they can be repaired is questionable but the image above shows the sheer scope of the damage to the facility and just how big of a hole was hiding under the museum.

Even if you are not a Chevrolet or Corvette fan/enthusiast – the news of the floor collapse at the National Corvette Museum should come as a painful piece of news to everyone in the automotive industry. Whether you like the Corvette or not, the cars that have been damaged or lost played a major part in the history of high performance vehicles in America and around the world and for the time being, it appears that those 8 Corvettes are gone. Fortunately, this happened in the wee hours of the morning so there were no employees or visitors in the museum when the floor gave way and that means that no one was injured as a result of the sinkhole damage.

The entire National Corvette Museum is closed during the inspection process, contrary to earlier reports.