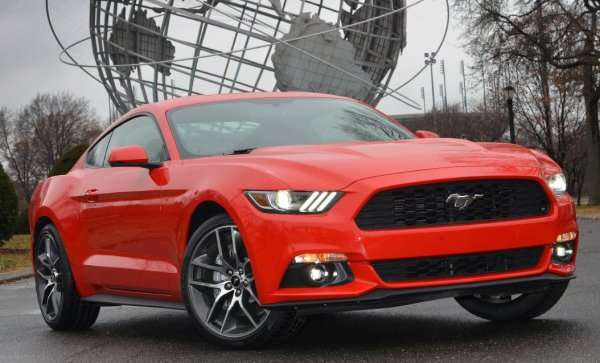 While Ford Motor Company has only promised that the 2015 Ford Mustang EcoBoost would offer at least 305 horsepower and at least 300lkb-ft of torque, a new report quoting an unnamed inside suggests that the turbocharged S550 Mustang will offer 350 horsepower – which would make it a far more formidable foe in the horsepower war than we first had expected.
Advertisement

When Ford first introduced the 2015 Mustang back on December 5th 2013, they revealed that this would be the first pony car with a 4-cylinder since the early 1990s and like some of the now-collectable SVO Mustangs, this new 4-cylinder would feature forced induction to make big power. Ford didn’t announce any official power figures back then and they still haven’t, but they promised that the new 2.3L EcoBoost engine would provide at least 305 horsepower and at least 300lb-ft of torque.

At first, we speculated that the EcoBoost would have somewhere in the area of 315hp and 325lb-ft of torque and should those numbers be close to the official figures, the EcoBoost option would be a little more powerful and little more fuel efficient than the base V6 while also adding the obvious fun of a boosted engine.

However, the folks at TFLcar.com spoke to an unnamed source close to the project who explained that the actual output of the 2015 Ford Mustang EcoBoost would be closer to 350 horsepower. This comes as a bit of a surprise as the same 2.3L EcoBoost in the new Ford Edge and Lincoln MKC which offers “only” 285 horsepower and 305lb-ft of torque. Some increase over the version in the crossovers is expected, but 350 horsepower would really be an impressive feat.

350hp Would Make One Quick Turbo Mustang
Since the EcoBoost 4-cylinder engine in the 2015 Mustang was made official by Ford Motor Company back in December, we have all pretty much assumed that it would be a highly efficient base engine. With estimated figures of 305 horsepower and 300lb-ft of torque, it would offer comparable power to the base V6 with a significant advantage in torque and fuel economy so those “at least” numbers would make for a strong improvement over the 3.7L V6. We also speculated that with those estimated figures, the EcoBoost would be poised to replace the V6 as the base engine within the next few years.

However, if the 2015 Ford Mustang EcoBoost model actually packs 350 horsepower, it would be more of a mid-level engine that would fall between the 300 horsepower V6 and the 5.0L V8 that is promised to provide “at least” 420 horsepower. When you take into consideration the fact that the 2.3L EcoBoost will likely offer a torque figure that is very similar (of not higher than) the horsepower number – and the fact that the EcoBoost engine weighs less than either the base V6 or the 5.0L V8 – the 4-cylidner Mustang could prove to be a serious performer.

Could This Still Be a Future Base Engine?
Now if the 2015 Ford Mustang EcoBoost engine does offer 350 horsepower and somewhere in the area of 350-360lb-ft of torque, could it still serve as an entry level engine in the future? Absolutely. While 350hp seems like a whole lot of power for a base model Mustang right now, keep in mind the steady growth of entry level power of the fabled pony car over the past 10 years or so.

The only concern with having a future base model Mustang with 350 horsepower is that it would be creeping up on the performance levels of the 5.0L V8. The current (2014) Mustang GT offers 420 horsepower and 390lb-ft of torque so 350/350 would be cutting it kind of close. However, we should be reminded that, like the EcoBoost numbers, the 5.0L V8 numbers for the 2015 Mustang are connected to the phrase “at least”. Should the EcoBoost engine really come with 350 horsepower, I would fully expect to see the Mustang GT engine jump up into the range of 450 horsepower and 440lb-ft of torque. This might not happen right away, as Ford has often rolled out an exterior/chassis refresh with “old” engines in one model year only to introduce newer engines in the second model year of the new version.

Based on that, we could see the 2016 or 2017 Ford Mustang EcoBoost serving as a base model package with 350 horsepower while the Mustang GT from those same years could climb to 450 horsepower. Remember, the 2016 Chevrolet Camaro SS will very likely have the new LT1 engine from the C7 Corvette Stingray with power in the area of 450-460 horsepower. Also, the 2015 Dodge Challenger Scat Pack now comes with the 6.4L Hemi that delivers 485 horsepower, so the jump in power for the lighter weight Mustang GT would allow it to keep up with the crosstown rivals from Chevrolet and Dodge.

Dustin Munro wrote on July 3, 2014 - 5:05pm Permalink
If Ford made the 2.3 litre 4 cylinder Ecoboost with about 350 hp and similar amount of torque,than the same cylinder and Ecoboost design (changed from I formation in I4 to V formation) should be used to make an ecoboost system for the coyote V8.That would give ford a 4.6 litre 700 hp and similar torque number V8 and even more if the cylinder size was made as 5.0 litre ecoboost and outmatch Chrysler's 6.2 litre Hellcat Hemi powered 707 hp and 650 lbft Dodge Challenger!
Shane Barber wrote on July 3, 2014 - 8:02pm Permalink
I like the way this guy thinks, the 2015 mustang Gt has a ford racing supercharger that makes 700+ hp that it could be paired with
Austin wrote on July 4, 2014 - 2:22am Permalink
I like how this guy think Ecoboosts are supercharged when in fact they have turbos
Cameron Rom wrote on July 4, 2014 - 2:06pm Permalink
The Ecoboost motors are turbocharged, but the current 2014 gt500 is supercharged. I could see Ford doing a new supercharged v8, it wouldn't have to fit with their popular Ecoboost nomenclature, freeing them to use different technology. There wouldn't be anything Eco about that engine.
Shane Barber wrote on July 6, 2014 - 10:49pm Permalink
I didn't say they had a supercharger, I said that for racing is rumored to have an supercharger kit for the Gt I know the Eco has a turbo
Jim wrote on July 5, 2014 - 10:25am Permalink
Yea, because when i think GT500 i know the owner must care about fuel economy.
Greg Aryous wrote on July 5, 2014 - 8:59pm Permalink
NOT!!! Way too much HP for this 2.3 I4 EB...!!! Best guess is more like 300-310. The new 2.7 V6 EB is more likely to produce 350 HP because of its CGI block...
Shawn wrote on July 6, 2014 - 12:29am Permalink
Mercedes CLA45 AMG is a 2.0 liter inline 4 and puts out 360hp and 330ft-lb. It is aggressively turbocharged, pushing 26 pounds of boost, but for the 2.3 liter that could be reduced a bit. Plus the new Stang motor is a good bit oversquare, so as long as it has a decently high redline and quality valvesprings, 350hp and thereabouts in torque really isn't too big of a stretch. In fact there are many boosted german cars with non-CGI engines that can easily be made to put out similar power. VW's 2.0L turbo I4's can easily be pushed into the 350-hp bracket, again with aggressive turbocharging, intercooling, and engine management. I think you underestimate the 4 cylinder :)