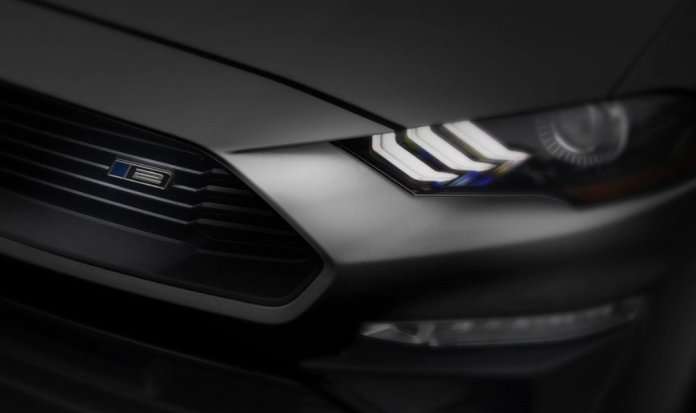 The high performance Ford experts at Roush Performance have offered a teaser of their 2018 Mustang and while we don’t get any details – we can expect that the 2018 Roush Mustangs will pack power levels nearing 700hp.
Advertisement

In the world of post-title upgrade packages, the folks at Roush Performance are among the best known and the most active, with six different packages for the 2017 Ford Mustang. The Mustang has been refreshed for 2018, including more power from both the EcoBoost 4-cylinder and the 5.0L V8 – and Roush already has plans for a new lineup of high performance pony cars for the new model year. Yesterday, Roush Performance offered the first teaser of its 2018 Mustang packages and while there are no details to go with this one image – we can make some guesses based on the current Roush Mustang lineup.

The Roush 2018 Ford Mustang
The image above shows the driver’s side headlight and the grille of the 2018 Ford Mustang in Roush trim and based on the “2” badge, we would guess that this is the Roush Stage 2 package for the 2018 Mustang. The current (2017) Roush Stage 2 package applies specifically to the Mustang GT, adding a performance suspension setup, an elaborate body kit package which enhances the look from front to back, unique interior appointments and Roush wheels wrapped in Cooper performance tires.

Basically, the 2017 Roush Stage 2 kit is a handling, aerodynamics and appearance upgrade package for the Ford Mustang GT and we can expect that there will be a similar model layout for the 2018 Roush Mustang. Of course, the new models will have a unique look and, more importantly, the Mustang GT’s added power for 2018 will lift the output to 460 horsepower and 420lb-ft of torque, so the 2018 Roush Stage 2 Mustang will be even quicker than the outgoing models.

In addition to the Roush Stage 2 shown above, the odds are good that Roush will introduced a Stage 3 kit as well, which begins with the components of the Stage 3 kit, but with the addition of a Roush 2.3L TVS supercharger, the output climbs to 670hp in the 2017 Mustang GT. With the 2018 Mustang GT packing 25 more horsepower from the factory, the Roush Stage 3 package should jump at least that much, leading to a figure of 695 horsepower. With that number being so close to the 700 range, my safe money says that the 2018 Roush Stage 3 Mustang will offer 700+ horsepower.

Finally, if the 2018 Roush Mustang packages follow the pattern of the 2017 models, there should be a Roush Stage 1, which adds the suspension, interior and exterior bits of the Stage 2 kit to the “entry level” Ford Mustang EcoBoost.

Right now, this is all speculation, but we should soon have full details on the Roush-modified 2018 Ford Mustang and when we do – you will find that information here on TorqueNews.com.

LG's New EV Battery Plant Is a Welcome News for Tesla
Tesla Giga Berlin's New Hurdle: It's Not Only the Gov't, but Now Tesla Itself
END_OF_DOCUMENT_TOKEN_TO_BE_REPLACED