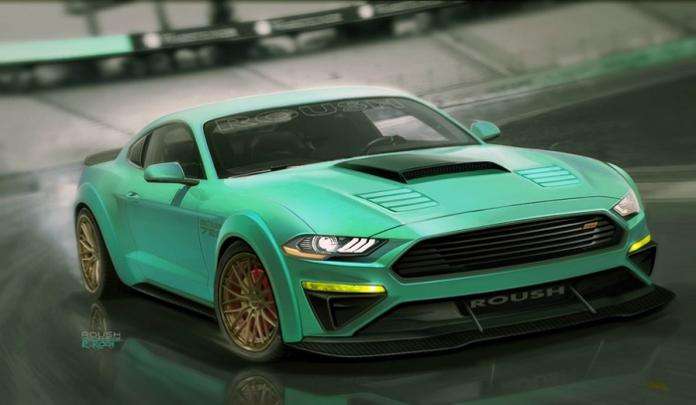 Roush is Bringing a Widebody 2018 Mustang GT to SEMA

Ford will feature seven customized 2018 Mustang models at the upcoming SEMA Show, but thanks to the teaser information, we know that one of them will be a custom widebody Mustang GT from the folks at Roush.
Advertisement

As always, the Ford Mustang will be among the most popular vehicles on the floor of the SEMA Show in Las Vegas when it opens next week. Although many aftermarket companies will have a Mustang in their individual booths, the sprawling Ford Motor Company display will likely have the biggest spread of beefed-up pony cars. Ford has promised seven custom 2018 Mustangs including fastbacks and convertibles with both the 4-cylinder EcoBoost and the 5.0L V8 on display.

One of the 2018 Ford Mustang GT fastbacks on display is from the Ford experts at Roush and in addition to some basic go-fast goodies, Roush and Ford have teamed up to show off a unique Mustang with an eye-catching widebody package

The Roush Widebody 2018 Mustang GT
The 2018 Ford Mustang GT fastback customized for SEMA by Roush is, of course, fitted with the 5.0L V8 and the new 10-speed automatic transmission. Roush began th customization efforts by adding a cold air intake, an active quad tip exhaust system with an x-pipe and "air gobbler" ram air setup with a Stratasys functional scoop. There is no mention of power gains, but with the 5.0L V8 breathing a little easier on both ends, it should make a little more than the standard 460hp.

To further improve performance, Roush added a set of Brembo GT-series performance brakes and their own 3-way adjustable suspension setup, along with a set of Vossen/Roush RVS wheels measuring 20x10 up front and 20x11 out back - all of which are wrapped in Continental Extreme Contact tires.

Where the Roush Mustang GT headed to SEMA really stands out is in its exterior design, as this car features an elaborate Roush Stratasys custom body kit. This kit adds window scoops, heat extractors in the hood, a new upper and lower grille design, a taillight blackout panel and hood struts, along with a bunch of carbon fiber body parts - including the front splitter, the rear aerofoils, the side rockers, the rear spoiler and the mirror caps. Finishing off the exterior package is a custom Grabber Green paint from Sherwin Williams.

While we only have this one image of the Roush-built 2018 Ford Mustang GT coming to SEMA, it looks like something that is going to draw a world of attention in the packed Vegas convention center.

LG's New EV Battery Plant Is a Welcome News for Tesla
Tesla Giga Berlin's New Hurdle: It's Not Only the Gov't, but Now Tesla Itself
END_OF_DOCUMENT_TOKEN_TO_BE_REPLACED