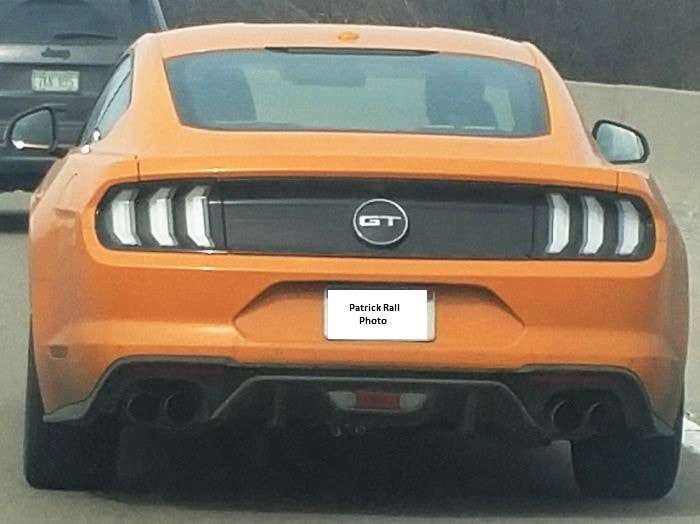 Yesterday afternoon, I came across a right-hand-drive 2018 Ford Mustang GT testing on I-96 in Metro Detroit with all of the features required for the European market and my passenger was able to snap a few pictures of the foreign-issue pony car on the move.
Advertisement

The 2018 Ford Mustang is not yet available in many markets outside of North America, but the uniquely equipped, right-hand-drive pony cars are on the road in the United States. This is, of course, a Ford Motor Company test car, but it is interesting seeing a Mustang so different than our own cruising through Metro Detroit.

I see plenty of foreign market vehicles from Ford, General Motors and FCA testing in the Detroit area, but it is rare to see right-drive cars being tested. Also, this is the first time that I have ever seen a right-hand-drive Mustang in the US, so I had my passenger take a few pictures while we were on the move.

The European 2018 Mustang
The 2018 Ford Mustang sold in Europe, Australia and other markets that require right-hand-drive will get a similar version to the car sold here in the USA. Most notably, it gets the new front end and a bit more power, although the foreign market models pack a bit less power than their American counterparts.

The biggest difference right now is that the 2018 Ford Mustang is currently available in the United States and Canada, but Europe, Australia and the other right-drive markets are expecting their refreshed pony cars during the second quarter. With the first quarter of the year ending in nine days, those folks in RHD markets shouldn’t have to wait much longer.

RHD Mustang in Detroit
As you can see in the pictures above, this Orange Fury 2018 Ford Mustang GT has the clear taillights, exterior mirrors that are shorter and taller than those found on American models, no hood vents and – most notably – the steering wheel is on the right side of the interior. It also doesn’t have the standard GT rear spoiler, but it does have the GT logo in the faux gas cap while the US models have the GT badge standing alone on the black panel.

Traffic didn’t cater to getting better pictures before the new Mustang exited, but it had Brembo brakes and the black 19-inch wheels of the US Performance Package.